One of the biggest challenges in computer architecture is integrating storage, memory and processing into a single unit. This would make computers faster and more energy efficient. University of Groningen physicists have taken a big step towards this goal. They have combined niobium-doped strontium titanate (SrTiO3) semiconductor with ferromagnetic cobalt. This interface creates a spin-memristor with storage abilities, which paves the way for neuromorphic computing architectures. 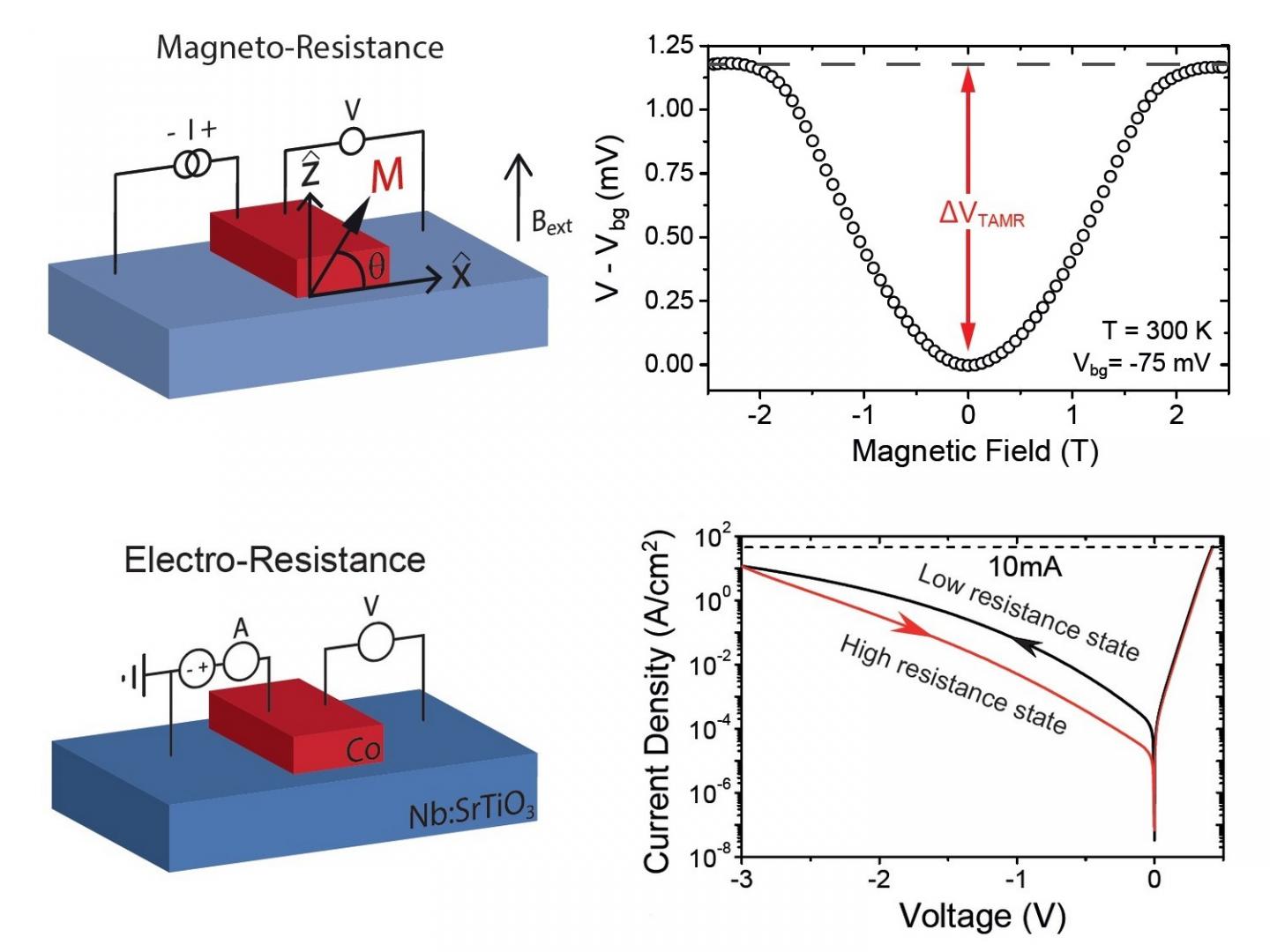 TAMR and electroresistance in aniobium doped strontium titanate (SrTiO3) semiconductor with ferromagnetic cobalt Top left: a simple device of Co on Nb doped SrTiO3 oxide semiconductor and the four-probe measurement scheme. Top right: a large TAMR value is obtained at room temperature due to a change in the junction tunnel conductance when the magnetization is rotated in respect to the direction of the current flow. Bottom left: the same device geometry is used to study the electroresistance state of the same junction (bottom right). (Source: Banarjee group, University of Groningen / Scientific Reports)

The device developed by the physicists combines the memristor effect for semiconductors with a spin-based phenomenon called tunneling anisotropic magnetoresistance (TAMR) and works at room temperature. The SrTiO3 semiconductor has a non-volatile variable resistance when interfaced with cobalt. An electric field can be used to change it from low to high resistance and back, called the electroresistance effect.

When a magnetic field was applied across the same interface, in and out of the plant of the cobalt, this showed a tenability of the TAMR spin voltage by 1.2 mV. The coexistence of a large change in the value of TAMR and electroresistance across the same device at room temperature has not been previously demonstrated.

“This means we can store additional information in a non-volatile way in the memristor, thus creating a very simple and elegant integrated spin-memristor device that operates at room temperature,” explains Professor of Spintronics of Functional Materials Tamalika Banerjee.

Banerjee works at the Zernike Institute for Advanced Materials at the University of Groningen. So far the attempts to combine spin-based storage, memory and computing have been hampered by a complex architecture along with other factors.

The key to the success of the Banerjee group device is the interface between cobalt and the semiconductor.

“We have shown that a one-nanometer thick insulating layer of aluminum oxide makes the TAMR effect disappear,” says Banerjee.

“You need the heavy atoms in SrTiO3 for the spin-orbit coupling at the interface that is responsible for the large TAMR effect at room temperature,” said Banerjee.

These devices could be used in a brain-like computer architecture. They act like synapses that connect the neurons. The synapse responds to an external stimulus but this also depends on the synapse’s memory of previous stimuli. The researchers are now considering how to create a bio-inspired computer architecture based on this research.

A system like this would be a step away from Von Neumann architecture. One major advantage would be that it is expected to use less energy and produce less heat.

The key to this breakthrough is the interface between cobalt and the semiconductor.

“We have shown that a one-nanometer thick insulating layer of aluminum oxide makes the TAMR effect disappear,” says Banerjee.

“You need the heavy atoms in SrTiO3 for the spin-orbit coupling at the interface that is responsible for the large TAMR effect at room temperature,”said Banerjee.

The devices could be used in brain-like computer architecture. They would act like synapses that connect the neurons. The synapse response to an external stimulus, but this response also depends on the synapse’s memory of previous stimuli. A system like this would move away from the classical Von Neumann architecture. The big advantage is that it is expected to use less energy and produce less heat.

The physics of what exactly happens at the interface of cobalt and the strontium semiconductor is complicated and more work needs to be done to understand this.

“Once we understand it better, we will be able to improve the performance of the system. We are currently working on that. But it works well as it is, so we are also thinking of building a more complex system with such spin-memristors to test actual algorithms for specific cognition capabilities of the human brain,” said Banerjee.

The next step of this device is to scale it up to a full computing architecture.

How to integrate these devices into a parallel computing architecture that mimics the working of the brain is a question that captivates Banerjee.

“Our brain is a fantastic computer, in the sense that it can process vast amounts of information in parallel with an energy efficiency that is far superior to that of a supercomputer,” she says.

The team’s findings could lead to new architectures for brain-inspired computing.