If a robot is sent to disable a roadside bomb, it needs to be able to sense when objects are slipping out of its grasp. But it has been difficult or impossible for most robotic and prosthetic hands to accurately sense the vibrations and shear forces that occur when a finger is sliding on a tabletop or when an object starts to fall.

Engineers from the University of Washington and UCLA have developed a flexible sensor “skin” that can be stretched over any part of a robot’s body or prosthetic to accurately convey information about shear forces and vibration that are critical to successfully grasping and manipulating objects.

The robot sensor skin mimics the way a human finger experiences tension and compression as it slides along a surface or distinguishes among different textures. It measures information with similar precision and sensitivity as human skin. It could vastly improve the ability of robots to perform everything from surgical and industrial procedures to cleaning a kitchen.

"Robotic and prosthetic hands are really based on visual cues right now -- such as, 'Can I see my hand wrapped around this object?' or 'Is it touching this wire?' But that's obviously incomplete information," said senior author Jonathan Posner, a UW professor of mechanical engineering and of chemical engineering. 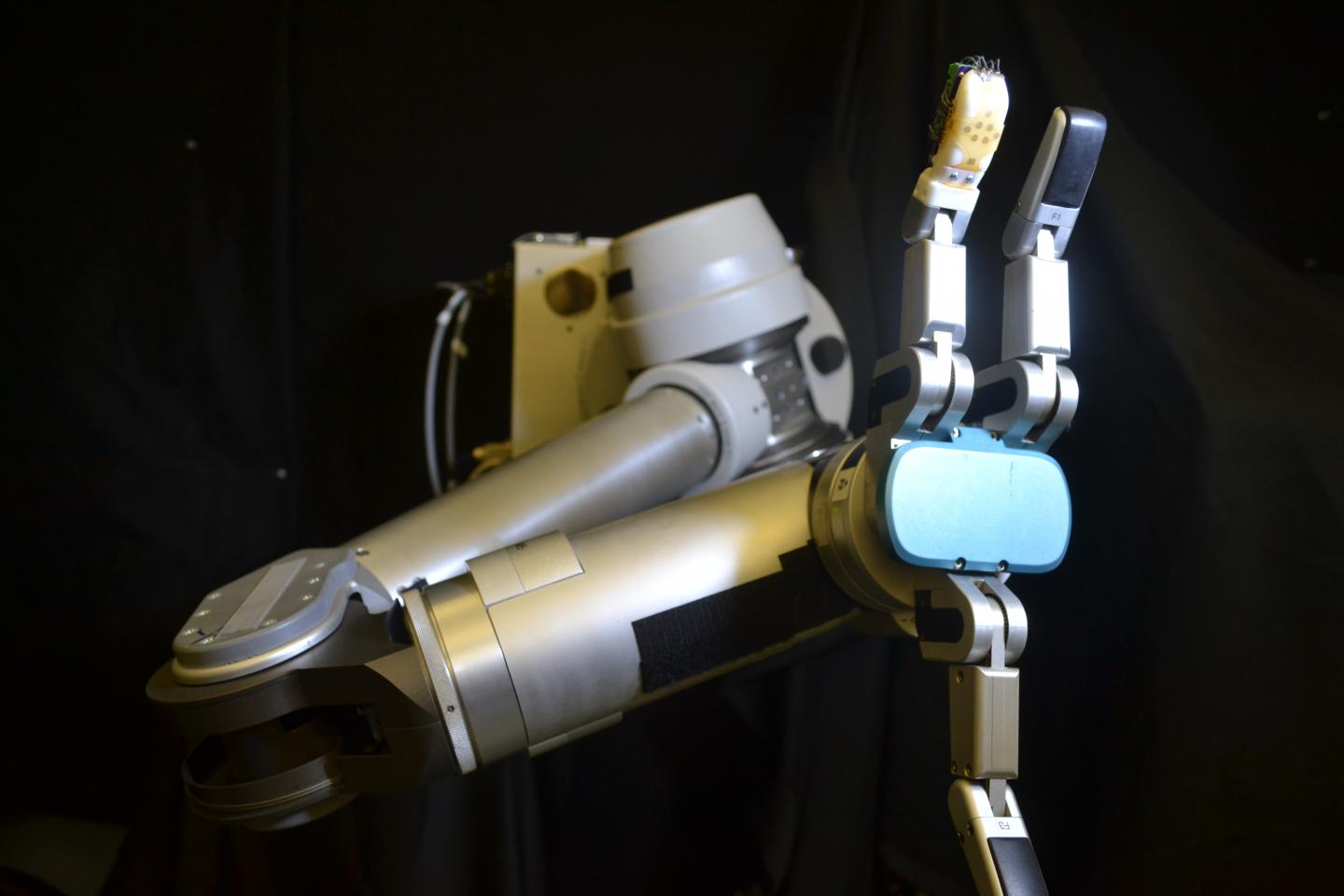 The flexible sensor skin wrapped around the robot finger (orange) is the first to measure shear forces with similar sensitivity as a human hand -- which is critical for successfully gripping and manipulating objects. (UCLA Engineering)

"If a robot is going to dismantle an improvised explosive device, it needs to know whether its hand is sliding along a wire or pulling on it. To hold on to a medical instrument, it needs to know if the object is slipping. This all requires the ability to sense shear force, which no other sensor skin has been able to do well," Posner said.

There are some robots today that have fully instrumented fingers, but the sense of touch is limited to just that appendage and you can’t change its shape or size to accommodate different tasks. The other approach is to wrap a robot appendage in a sensor skin, which provides better design flexibility. But these skins have not yet provided a full range of tactile information.

The stretchable electronics skin that was manufactured at the UW’s Washington Nanofabrication Facility is made from the same silicone rubber that is used in swimming goggles. The rubber is embedded with small serpentine channels that are about half the width of a human hair. It is filled with electrically conductive liquid metal that won’t crack or fatigue when the skin is stretched, as solid wires tend to do.

When the skin is put on a robot finger or end effector, these microfluidic channels are strategically placed on either side of where a human fingernail would be.

When you slide a finger across the surface, your nailbed bulges out to one side, while the other side becomes taut under tension. The same thing happens with the robot or prosthetic finger. The microfluidic channels on one side of the nailbed compress while ones on the other side stretch out.

When the channel geometry changes, so does the amount of electricity that can flow through them. The research team can measure these differences in electrical resistance and correlate them with the shear focus and vibrations that the robot finger is experiencing.

"It's really following the cues of human biology," said lead author Jianzhu Yin, who recently received his doctorate from UW in mechanical engineering. "Our electronic skin bulges to one side just like the human finger does and the sensors that measure the shear forces are physically located where the nailbed would be, which results in a sensor that performs with similar performance to human fingers."

Placing the sensors away from the part of the finger that is most likely to make contact makes it easier to distinguish shear forces from the normal “push” forces that also occur when interacting with an object, which has been difficult to do with other sensor skin solutions.

The research team from the UW College of Engineering and the UCLA Henry Samueli School of Engineering and Applied Science has demonstrated that the physically robust and chemically resistant sensor skin has a high level of precision and sensitivity for light touch applications. These applications could be opening a door, interacting with a phone, shaking hands, picking up packages, handling objects and more. Recent experiments have shown the skin can detect small vibration at 800 times per second, which is better than human fingers.

"By mimicking human physiology in a flexible electronic skin, we have achieved a level of sensitivity and precision that's consistent with human hands, which is an important breakthrough," Posner said. "The sense of touch is critical for both prosthetic and robotic applications, and that's what we're ultimately creating."

A paper on this research was published in Sensors and Actuators A: Physical