Nicolette Emmino
Japanese scientists at Hokkaido University have developed a device that uses both magnetic and electronic signals, which could nearly double the storage capacity of traditional memory devices like USB flash drives.

USB flash drives are electronic data storage devices that store information by using millions of small gates that process information into "words" consisting of various combinations of the numbers 0 and 1.

The researchers discovered the ability to use magnetic signal along with the electronic signal to create two times the storage capacity in these "multiplex writing/reading" devices. In addition to the binary 0/1 method of storing information, this creates an A/B store for the information as well. This would require finding a material that can switch back and forth from a magnet to a non-magnet state. 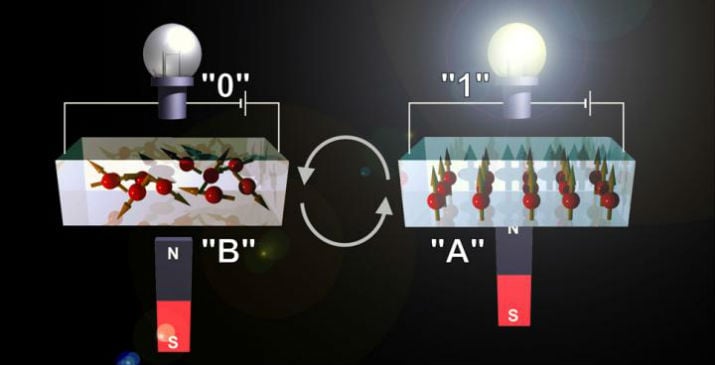 Using two forms of strontium cobalt oxide with different oxygen content, the device can be switched from an insulating/non-magnet state to a metallic/magnet state simultaneously by electrochemical oxidation/reduction reaction at room temperature in air. (Image Credit: Hiromichi OHTA, Hokkaido University)

The team worked with two forms of strontium cobalt oxide (SrCoOx) to create the device– an insulating non-magnet and a metal magnet. By changing the oxygen content in this compound, the team caused it to switch between the two forms.

Currently there are two methods available, but one requires using a high temperature heat treatment and the other method involves a dangerous alkaline solution. This would require that a device is sealed so that the solution does not leak. These methods have proven to be challenging.

The new method uses strontium cobalt oxide safely at room temperature in air. The team applied a sodium tantalate thin film, which can be used at room temperature without leaking alkaline solution, over layers of strontium cobalt oxide. When they applied a three-volt current – about one-seventh of the voltage required in currently available USB flash drives – the insulating form of the solution switched to its metal magnet form, SrCoO3, in three seconds. Current devices can store information in 0.01 seconds.

According to the researchers, making the device smaller would shorten the time needed for the compound to switch between an insulator and magnet. This would allow the storage of an even larger number of photos and videos in mobile phones.