In many system implementations, it's necessary that the processor or controller know how much current is actually flowing through the load or other parts of the circuit. This current reading provides critical feedback to the control loop, as well as monitors for possible fault conditions where an overcurrent condition has occurred. 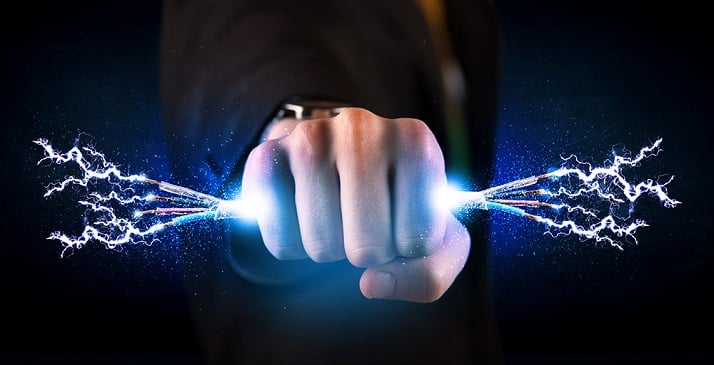 Among the situations where current monitoring is either mandated by the design, or a good idea for improved performance, are:

•Hot-swap designs, to control the power-on ramp-up when a new card is incurred into a live backplane

There are several ways to provide current sensing into a design, and also several topologies which can be used with a sensing scheme. The three most-common sensing approaches vary significantly in basic technology, and each has tradeoffs in performance, difficulty in implementation, safety, grounding, cost and more. They are: A Hall-effect device produces a voltage when a magnetic field is applied in the presence of a current. (Source: NIST)

•Hall-effect device: a solid-state component that produces a voltage which is proportional to a sensed magnetic field and flow of current, Figure 1. An inductive pickup uses a long-established principle of induction to sense the magnetic field generated by an alternating current. The sense (shunt) resistor develops a voltage across its terminals due to the current flowing through it. (Source: Author)

•Sense resistor: current of interest flows through a low-value resistor, and associated amplifier circuitry senses the voltage drop which is developed across the resistor, Figure 3. [Note that this series resistor is often called a "shunt" resistor – which it is not –but that is very common industry usage.]

Let's look at these in more detail, to better understand the attributes and interface issues of each transducer approach. All three are reliable and can produce desired results if used properly, and if their capabilities are properly understood.

The Hall-effect device is well-suited for sensing passing of a magnetic field (or its interruption) such as when commutating a motor. Image source: Allegro Microsystems.

The Hall-effect device is most often used for sensing presence/absence of current, such as for motor commutation, Figure 4. It is less effective when the current value must be known with higher accuracy, due to issues of linearity, drift (temperature coefficient), and physical placement with respect to the wire or PC-board trace whose current is being measured.

The magnetic pickup can produce very good results over a wide range of currents and temperatures. The output of the sensing coil is a current and so needs a current-to-voltage amplifier, so the circuit designer must provide this (not difficult, just a little different). There is also an issue in manufacturing: since the coil must surround the current-carrying wire of interest, the physical design must include a loop which stands off the PC board and which goes through the coil, or some other arrangement which accomplishes the same result.

The sensing resistor is a very popular, low-cost technique. A resistor – generally in the milliohm or below range – is inserted in series and the voltage across it is amplified. The engineering challenge is the tradeoff between resistor value and output voltage. On one side, a larger resistor yields a larger voltage, which improves signal-to-noise ratio (SNR) and ease of amplification. However, a higher-value resistor also wastes power, dissipates significant heat (do the math for a 0.1 Ω resistor and 50 A current), and its presence (and associated voltage drop) in the wire of interest can affect the performance of the system.

The larger-value resistor can also affect the performance and stability of the closed loop which is controlling the load, since the voltage the load gets is not the same as the voltage that the controller is providing to the load, as some of the voltage is dropped across the resistor. Those factors make the case for as small a resistor value as possible, commensurate with a viable voltage reading across the resistor. (Deciding on that resistor value is a simple, yet clear, case of engineering tradeoffs.)

The non-contact Hall-effect and coil methods are suitable when all that is needed is a qualitative, relative assessment of current flow, as it is difficult to calibrate their outputs. In contrast, the resistor easily provides a quantitative, precise readout, since the resistor value and voltage across it are known, so simple Ohm's Law math yields the current value.

Isolation may be needed

In electrical isolation, signal information passes a barrier through while no actual current flows; there is no galvanic path between signal source and signal receiver. (Source: Author)

In many applications, the output of the current-sense transducer must be electrically isolated from the rest of the circuit, meaning there is no galvanic or ohmic path between the two, Figure 5. This is required either for safety reasons, where a high voltage at the sensing point cannot be allowed to be in contact with lower-voltage circuitry or the user, or due to circuit topology (more on this below, on high-side versus low-side sensing).

For both the Hall-effect and magnetic-pickup approaches, isolation to hundreds and even thousands of volts is inherent in the nature of the sensor as they are non-contact devices. Consider it this way: these sensors do not actually "touch" the current-carrying wire: they only sense the magnetic field that the wire produces. This inherent isolation may be a critical consideration when choosing the current-sense approach.

For the resistor-based current sensing, the opposite is the case: the resistor is physically inserted into the current-carrying path so there is no isolation at all. Therefore, to achieve isolation, a specialized isolation amplifier must be used. There are many ways to achieve this isolation function in an amplifier, using optical, magnetic, capacitive, and even RF (transmit/receive) techniques. Each has cost, performance, and capability attributes, as isolating a 5 V signal in a low-voltage circuit is very different than isolating that same voltage, or a very large one, inside a hundred or thousand-volt design.

When using a Hall-effect or magnetic-pickup current sensor, it doesn't matter where along the current-carrying wire the transducer is placed. Again, the transducer is really in an "observer" role rather than an intrusive one. In low-side sensing, the shunt resistor is located between the load and ground, which eases the sense circuitry but has major implications for the grounding of the load and control-loop performance. (Source: Author)

For the resistor approach, the location is an issue, as it can be placed either between the supply rail and the load, or between the load and ground; the former is called high-side sensing and the latter is low-side sensing. Low-side sensing is the easiest approach, since the bottom of the sense resistor is connected directly to ground while the amplifier which senses the voltage across the resistor can also be grounded, Figure 6. The basic sense function works in a very straightforward manner.

However, low-side sensing has some system-level consequences which work against its use. First, while the sense resistor and its amplifier are grounded (which is good) the load is no longer grounded. In many systems, the load must be grounded either for safety reasons, or due to mechanical-installation consideration; for example, the frame of the starter motor in a car. While it is possible to isolate the load itself from ground, this is often costly and prone to failure modes which have serious consequences.

Second, the load is usually part of a closed control loop, and any non-load resistance which the controller perceives to be part of the load has an impact on loop performance and stability, as noted earlier. This undesired effect is usually aggravated when there non-load resistance is physically between the load and ground, since the controller may be modeled for a load which is grounded. High-side sensing keeps the load grounded, but the sense resistor will need a differential amplifier with adequate common-mode-voltage rating and may need galvanic isolation. (Source: Author)

High-side sensing eliminates the problems which may result from an ungrounded load. However, with the sense resistor located between the supply rail and load, the voltage across that resistor is no longer ground referenced, Figure 7. This means that even with a low-voltage circuit, electrical isolation may be needed; even if isolation is not required for performance or safety, a differential amplifier with high-enough CMV and CMRR (common mode voltage and common mode rejection ratio) ratings will be needed.

While current sensing is not glamorous, and is more difficult than measuring a voltage in a circuit, it is an essential part of many designs ranging from small, portable products to large industrial systems. The choice of sensing technique and topology depends on current and voltage levels, safety mandates, topology issues, and accuracy needed. By understanding the options for current sensing, the designer can accept it as another basic function that a complete circuit must provide, and effectively implement it to meet the technical and cost mandates.