Hall effect and shunt-based systems are two approaches to current sensing used by li-ion battery management systems found in today's electric vehicles (EVs). Following is an evaluation of the pros and cons of each.

A battery in an EV or hybrid EV (HEV) must supply 100 kW of power or greater in response to driver demand. A typical EV or HEV battery system consists of hundreds of li-Ion battery cells connected in series to generate a voltage of 350 V or more. The voltage, current and temperature of the battery system must be carefully monitored to control charging and discharging, to balance the charge between cells, to keep the cells within their safe operating area (SOA), and to calculate key battery parameters such as state of charge (SOC) and state of health (SOH).

The current sensor must be able to accurately measure currents from milliamps to hundreds of amps over automotive operating temperatures of -40° C to 125° C and an operating life of up to 20 years. Two measurement methods based on very different principles have established themselves in the last two decades: magnetic current sensors including flux gates, current transformers and Hall effect sensors; and shunt-based current measurement sensors.

Hall effect sensors are the most common type of magnetic current sensor. Its operation relies on the Hall effect, shown in Figure 1(a) where current (I) flowing through a conductor in the presence of an applied magnetic field (B) generates a transverse Hall voltage (UH) that is a function of the current, the magnetic field, the thickness of the conductor and the charge carrier density.

Figure 1: The Hall effect (a) and a Hall effect current sensor (b). Source: Isabellenhütte

The Hall effect forms the basis of a current sensor, shown in Figure 1(b). A Hall element is mounted in the gap in a ferrite magnetic core placed around the current conductor. The Hall voltage indicates the DC magnetic flux, leading to a measurement of the DC current in the conductor.

Commercially available devices typically include amplifiers to boost the small Hall voltage to a usable level.

A shunt-based current sensing design determines the current I by measuring the voltage V generated as I flows through a shunt resistor R placed in the battery line, as expressed by Ohm’s law:

Figure 2 shows a typical EV or HEV arrangement where the shunt is placed in the battery return path. The shunt resistor is part of a module that also includes a battery management IC to measure the voltage across the shunt and communicates with the vehicle network over the industry-standard CAN bus. Note that the current flow can be positive or negative. 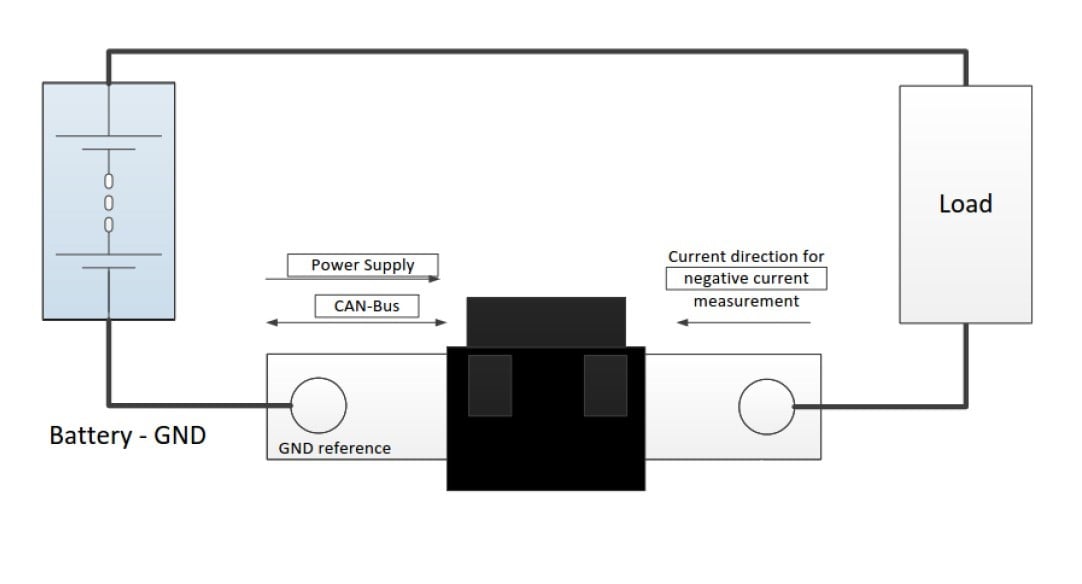 The resistance of an “ideal” shunt resistor does not change with time, current or operating temperature; this is not true for a real-world device. For example, any resistor dissipates power according to the equation P = I2R. As I increases, so too does the temperature. In a real component, a change in temperature causes a change in the value of R, characterized in a resistor data sheet as the temperature coefficient of resistance (TCR). Additionally, component aging causes the resistance to change over time, and a real-world device also exhibits parasitic inductance and capacitance.

At low currents, error may occur due to thermal electromotive force (EMF) — a voltage in the microvolt (μV) range caused by temperature variations across the shunt resistor.

Isabellenhütte has developed a range of specialized alloys such as Manganin, Isaohm and Zeranin for current measurement applications. Shunt resistors made from these alloys combine low resistances with extremely low inductance, TCR and thermal EMF and excellent long-term stability.

Some factors to consider include the lifetime calibration over full temperature range, the functions available in a single module, precision-driven tolerances, susceptibility to magnetic interference and accuracy/drift over temperature.

The advantages of Hall effect sensors include the ability to measure both DC and AC current, inherent galvanic insulation, low power loss and thermal decoupling from the power electronics.

Their main disadvantages include low bandwidth; output drift and non-linearity over temperature; and self-heating at high currents that leads to a low overcurrent capability. The magnetic core exhibits hysteresis, and saturation leads to non-ideal offset and linearity characteristics. Additionally, the core contributes to a comparatively large size and weight.

A shunt-resistor measurement system features high bandwidth, good performance under overcurrent conditions and can measure both AC and DC currents. Without a magnetic core, the complete system is lightweight, saturation and hysteresis do not occur, and it is less prone to noise in the signal caused by EMI. The shunt-based system also features high accuracy over the complete temperature range; the specialized resistive alloys used have a very predictable temperature-resistance behavior, allowing for precise temperature compensation. Figure 3 illustrates the shunt-based system’s superior accuracy over temperature versus a Hall-effect system. 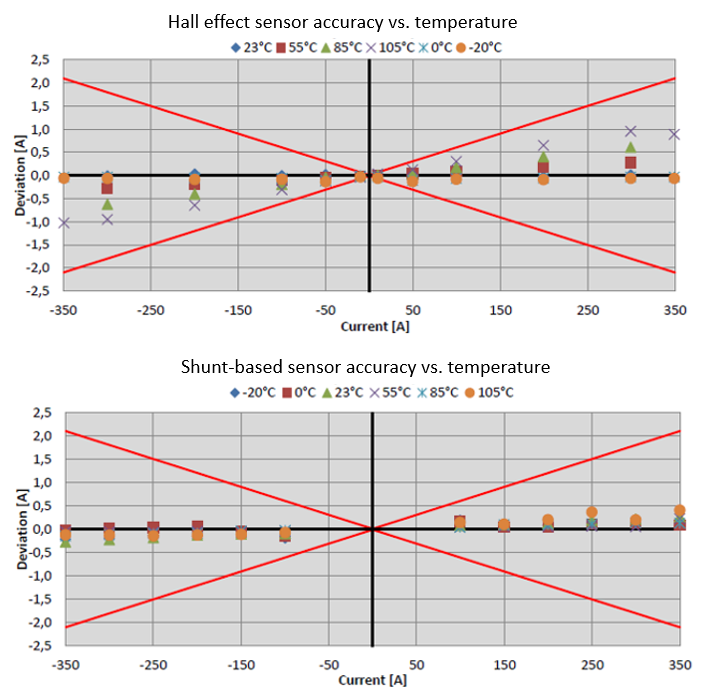 Considering some disadvantages, the current being measured must flow through the shunt resistor, requiring the inclusion of an isolation stage between the measurement stage and the rest of the system. High currents generate heat in the shunt resistor that must be dissipated effectively; however, with resistance values as low as 5µΩ, Isabellenhütte shunt resistors are rated for a maximum temperature increase of 20K even at rated currents up to 2.5 kA. The small amount of heat generated can be dissipated through the busbar connection with no need for additional heat management techniques.

Figure 4 shows a comparison of some key parameters between two devices. One device is a closed-loop compensated Hall effect current transducer from a major manufacturer. The other is a comparable device from Isabellenhütte’s IPC family of modules, containing a shunt-based current sensor and a high speed sigma-delta analog-to-digital converter. Both devices are rated for 1,000 A RMS nominal current. 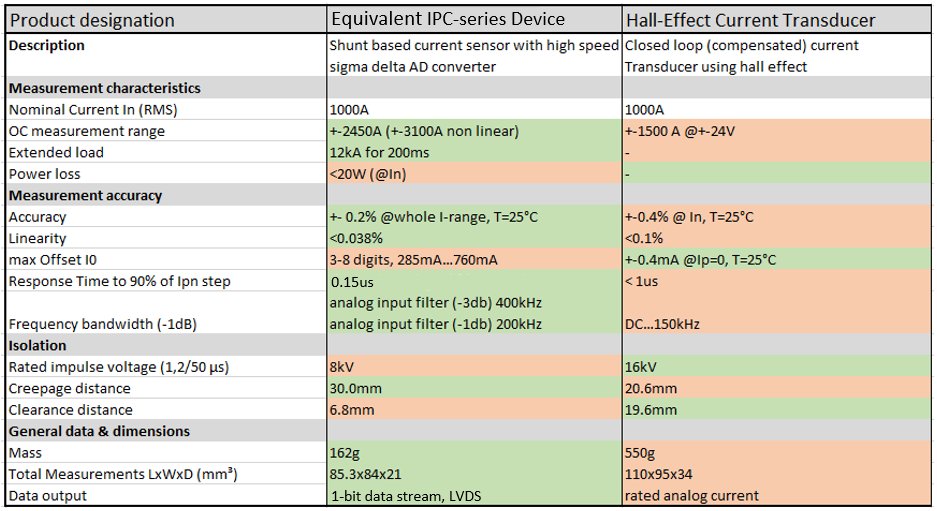 In addition to the electrical performance specifications, the designer must also consider other criteria including the cost of components, total cost of ownership, package size and ease of system integration.

Detailed comparisons depend on each application, but in general, Hall effect current sensors are simple to install and compact if the current to be measured is less than about 500 A. They are also lower cost for low current, lower performance applications. Shunt measurement systems are lighter weight, consume less space and are usually lower cost in high current and high performance applications. Modular shunt measurement solutions offer a choice of commonly-used options such as overcurrent (OC) sensing. They also offer programmable features: cycle times; software triggering; plus CAN-related parameters such as IDs, log files and error logs. 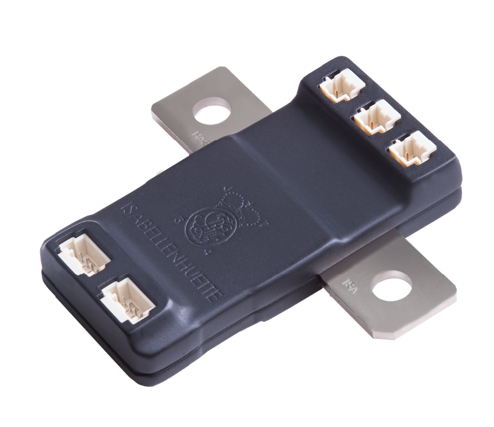 The IVT family of intelligent current and voltage sensors is specifically designed for use in high voltage battery management systems to monitor the status of li-ion batteries. The family bundles a precision shunt resistor and an application-specific integrated circuit (ASIC) in a single package, allowing the measurement of continuous currents of up to 2,500 A and communication through a CAN 2.0 interface

The modular system design allows for the addition of other functions to basic current measurement. Examples include up to three high voltage sensing lines, time synchronous energy counter and power calculation, selectable current ranges, programmable overcurrent detection and temperature measurement at the conductor bar. Internal CAN termination is another selectable option.

If the design requires current measurement on the high voltage side of a battery system, which may be several hundred volts above ground, the communication interface and the supply voltage of the measuring modules can be isolated galvanically (Figure 6). 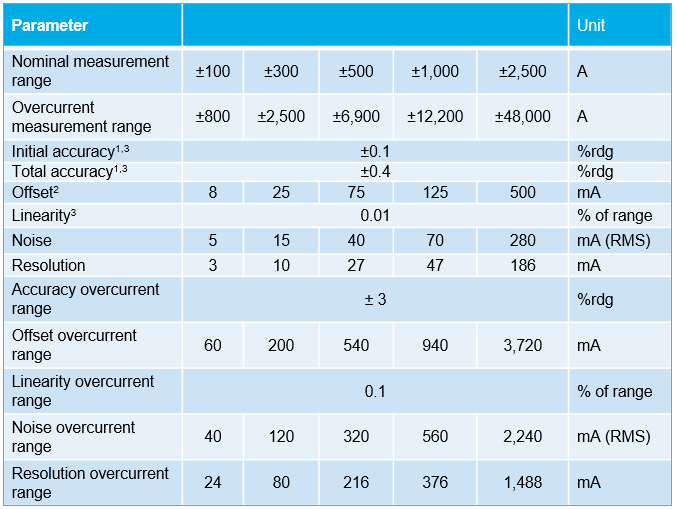 Current-sensing technology in other applications

Shunt-based current measurement is also a competitive option for these applications, but each application brings its own set of design requirements and challenges. For example, voltages of up to 22 kV may be present in energy distribution applications; industrial converters require extremely precise measurements of phase currents for maximum operating efficiency; and the batteries in UPS systems must be able to remain fully charged for years and ready to supply high current for a sustained time at a moment’s notice.

Shunt-based sensing technology can be a smart and efficient solution for vehicular and stationary applications. Magnetic components have their place, but shunt-based solutions are preferable where precise performance over a wide temperature range is a priority.