Home improvement retailer, Lowe’s, has created a spin-off innovation company that will send a 3-D printer to the International Space Station (ISS) next year.

The printer will be the first permanent additive manufacturing facility for the ISS and will bring tools and technology to astronauts in space. 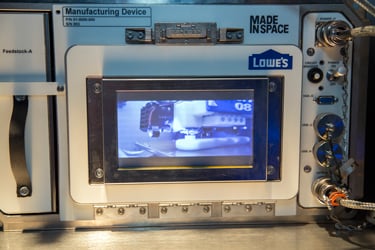 The Lowe’s 3-D printer that will arrive in space next year. Image Credit: Lowe’sThe Lowe's 3-D printer is set to arrive at the ISS, 200 miles above Earth where astronauts will be able to use 3-D printing technology to create a tool on-demand and produce parts they may not have onboard and immediately available.

"Lowe's and Made in Space share a vision of how 3-D printing can revolutionize retail and home improvement, while also changing the way astronauts work in space," says Kyle Nel, executive director of Lowe's Innovation Labs. "This is just the beginning of a broader partnership with Made in Space that will bring tools to space and new technology to Earth."

"For the first time, astronauts can now manufacture what they need, when they need it in space," says Jason Dunn, chief technology officer and co-founder of Made in Space, the company Lowe’s has teamed up with to make this possible. "We have successfully demonstrated the technology's capabilities in space. And now with the launch of the permanent additive manufacturing facility to the ISS, we are enabling humanity to manufacture things off the planet."

Lowe’s has been working on the 3D-printing front for over a year now. Last year, the company introduced its first proof of concept, the Lowe's Holoroom. The augmented reality design experience was tested in stores in Toronto for six months and led to the Lowe's Holoroom that will be installed in 19 stores across the United States beginning next month.

The Holoroom evolved from a single platform augmented reality solution to a virtual reality design and visualization tool that leverages Oculus Rift optic technology in stores and Google Cardboard viewers that consumers can take home.

Lowe's Innovation Labs and Google collaborated to create a shareable Holoroom experience that combines YouTube's 360-degree video capabilities with Google Cardboard to enable customers to enjoy and share their virtual kitchen or bathroom design whenever and wherever they choose.

For more information about the 3-D printer that will be launched into space, visit Lowe’s Innovation Lab.