Semiconductor companies are going to spend about the same amount on fab equipment in 2013 as they did last year, but the overall market is forecast to rebound strongly in 2014, according to industry association SEMI. 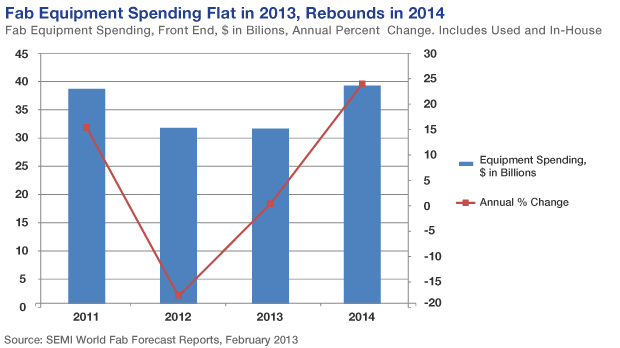 Capacity is now forecast to expand by just 2.8 percent this year and 5.4 percent in 2014. Excluding 2009, the years 2012 and 2013 show the lowest growth rate for new capacity over the past 10 years. However, pent-up demand is expected for some product types because capacity additions have been cut to minimum levels while chip demand keeps increasing.

Although the overall outlook has improved somewhat, fewer players in the market can afford the rising costs for R&D and upgrading facilities as the amount of money needed to keep pace with the technology requirements is immense.