After a year of quarterly year-over-year (y/y) growth in 2014, global shipments of televisions suffered the largest y/y decline in more than five years during the second quarter, according to a new report from IHS.

While the decline in shipments impacted Western Europe and Japan, the most pronounced fall was in the emerging regions of Latin America, Asia Pacific, Eastern Europe, the Middle East and Africa. Meanwhile, demand in North America returned to positive and China also showed growth but that momentum is slowing, IHS says. 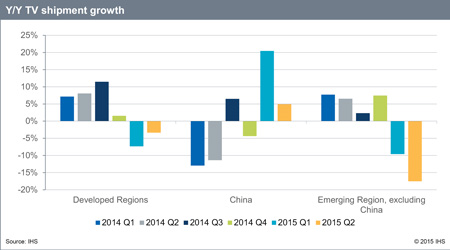 While China saw growth in Q2, developed and emerging regions suffered declines in TV shipments. Source: IHS“Many global brands are shifting to a weaker outlook for the balance of the year, as a result of the broad decline in demand worldwide,” Gagnon says.

The lone bright spot in the global TV market was the rise in 4K TV shipments that rose 197% y/y to reach 6.2 million units. The growth in 4K TVs was the result of price erosion and more affordable tiers of 4K models becoming available in the market, IHS says.

As usual, the Top 5 brands were responsible for 60% of all global TV revenues in Q2 with Samsung leading the way with 29%, followed by LG Electronics with 14% and Sony at 7%. Chinese brands Hisense and TCL rounded out the TV brand rankings with 6% and 5%, respectively.

LCD TV Panel Inventories to Rise in Second Half of 2015