The market for foldable displays is rising rapidly driven by new applications. With smartphones and tablets expected to adopt foldable displays as early as next year, this display type is forecast to represent more than half of the total display shipments by 2020, according to a new report from IHS. 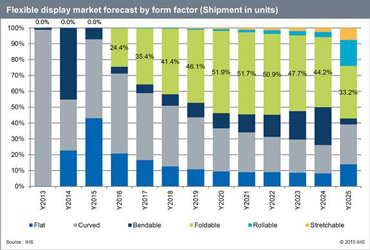 “Foldable displays are leading to innovative new applications and revolutionizing the flexible display market,” says Jerry Kang, principal analyst for emerging displays at IHS. “In fact, we can expect to see foldable tablets and smartphones as early as next year.”

The benefits of foldable displays such as ruggedness, lighter weight, decreased thickness and greater portability are opening up new opportunities for new applications in the display market. LG and Samsung have already introduced flexible organic light emitting diode (OLED) displays in their flagship smartphones and the Apple Watch also boasts a flexible OLED display, which has kicked off momentum in the wearable device market for further innovations, IHS says.

“Flexible displays are receiving a lot of attention, not only from consumer electronics giants like Samsung and Apple, but also from startup companies experimenting with new and innovative applications,” Kang says.