The market for global Long Term Evolution (LTE) mobile infrastructure equipment will peak this year, after which it will begin to decline as a result of operators completing major rollouts, according to a new report from IHS.

“LTE is now set to perform at $6 billion a quarter for some time as operators complete their major remaining rollouts,” he says. 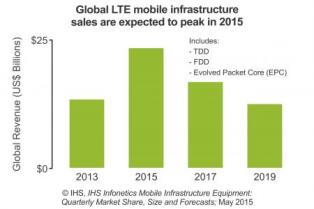 Global LTE infrastructure sales are expected to peak in 2015. Source: IHSIn an earlier report this year, Téral forecasted that LTE buildouts for LTE mobile infrastructure would start declining in 2016. The results of the first quarter of the year confirm these findings, Téral says.

Total revenue for the quarter was $11 billion. On a year-over-year basis, however, 2G/3G/4G mobile infrastructure revenue was up 4% in the first quarter driven by persistent spending in China for TDD LTE.