Spending on Long Term Evolution (LTE) helped to push mobile infrastructure revenue up 10 percent in 2014, but with the peak reached for LTE buildouts, a decline in mobile macro infrastructure spending is slated to begin in 2016, according to new research from IHS Inc. 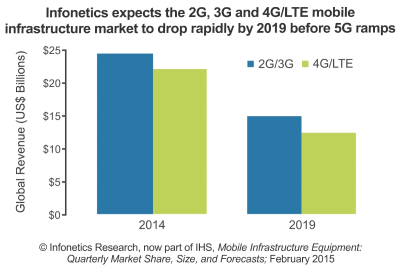 IHS forecasts mobile infrastructure revenue to drop to $27 billion by 2019.For the full year 2014, LTE was responsible for pushing infrastructure spending to $46.8 billion worldwide, thanks in large part to China Mobile's massive TDD-LTE deployment, IHS said. LTE helped pull the entire mobile infrastructure market out of its funk, growing 69 percent in 2014 from the previous year.

Other highlights from IHS' recent research include: