Long Term Evolution (LTE) wireless technology networks are slowly but surely transitioning to true 4G just in time for the debate to begin regarding the next-generation technology, 5G, according to a new survey of wireless operators conducted by IHS.

The move to true 4G is good news, says Stéphane Téral, research director for mobile infrastructure and carrier economics at IHS. However, the bad news is that most users already believed they were on 4G. With most consumers complaining about inconsistent experiences and falling short of expectations, current networks have left something to be desired.

“How many times does your smartphone display LTE or 4G and you still see the infamous spinning wheel?” Téral questions.

However, with half of the operator responses in the survey indicating that they have already deployed LTE-Advanced (LTE-A) on their LTE networks, this is slowly changing, IHS says. 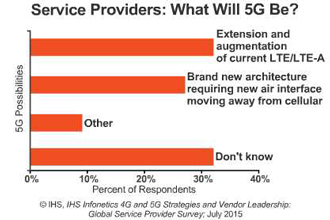 Survey results from operators when asked about 5G possibilities. Source: IHS As far as 5G goes, the debate over the next-generation of wireless smartphone connectivity is mixed over fanfare, hype and confusion, Téral says. The results from the IHS survey back up this statement with operators having minimal concrete answers about what 5G will be and what it will not be.

Other interesting trends happening among operators according to the survey include:

Carrier Aggregation: Making the Whole Greater than the Sum of Its Parts