A new consortium of European firms, formed with the support of the European Commission (EC) is aiming to bring flexible radio frequency (RF) electronics mainstream.

The consortium, which goes by the name

The partners will develop near field communication (NFC) tags using indium-gallium zinc oxide (IGZO) thin-film transistor (TFT) technology on plastic film. The flexible chips will be integrated into game cards as part of a larger strategy by Cartamundi to develop game cards for the connected generation. Cartamundi (Turnhout, Belgium) is a worldwide leader in the production and sales of playing cards, promotional cards, casino cards, collector card games and board games.

The PING consortium intends to establish a standardized, high-volume manufacturing flow for embedding wireless identification and power transfer technology into printed objects and printable substrates within three years. Objects could include packaging, cards and stickers. The substrates are likely to be paper, cardboard and plastics.

The consortium contends that flexible thin-film electronics and printed materials will make a perfect combination for the Internet of Things (IoT).

The PING project will enable the identification and interaction with printed objects through NFC and radio-frequency identification (RFID) readers, which are becoming ubiquitous in smartphones. In addition, the group will seek to integrate sensors, displays and actuators such as sound generators, paving the way for “The Internet of Games” as well as IoT.

IMEC and Holst Centre/TNO will focus on the development of flexible thin-film technology and chip design, while PragmatIC will seek to align designs with its own mass production capability. Smartrac will contribute expertise on the interface between the printed antenna and TFT electronics. Cartamundi and Van Genechten Packaging will perform the last step of the supply chain—embedding the electronics in printed products.

Currently, Cartamundi embeds silicon-based NFC chips in their game cards, connecting traditional game play with electronic devices such as smartphones and tablets. The IGZO TFT technology that will be used addresses the game card industry’s call for much thinner, more flexible and virtually unbreakable NFC chips. 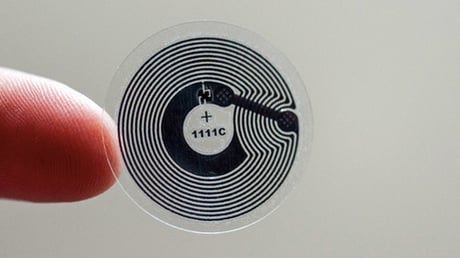 One of the many NFC tags available"Not only will Cartamundi be working on the NFC chip of the future, but we will also reinvent the industry's standards in assembly process and the conversion into game cards," said Steven Nietvelt, chief innovation and marketing officer at Cartamundi, in a statement.

In 2012, IMEC Holst Centre, Evonik Industries AG, Poly IC and their partners in the EU FP7 project ORICLA fabricated the world’s first RFID circuit made in low-temperature, thin-film technology that allows reader-talks-first communication. The technology behind this prototype can be used to create RFID tags that are cheap enough and have enough performance to be used as intelligent item-level tags on the packaging of retail consumer goods.