Chinese mobile phone display module makers are trying to put the squeeze on rivals by increasing their share of global handset display shipments in 2015, resulting in increased competition, according to new research from IHS Technology.

Terry YuShipments of mobile phone display modules are expected to increase by 4 percent in 2015, reaching 2 billion units, according to the IHS report. Because of this limited growth expectation, China's module makers have made a concerted effort to raise their market share to command greater influence and revenue. As an example, BOE unseated Samsung Display to become the leading global mobile phone display module supplier in the third quarter of last year, IHS said. 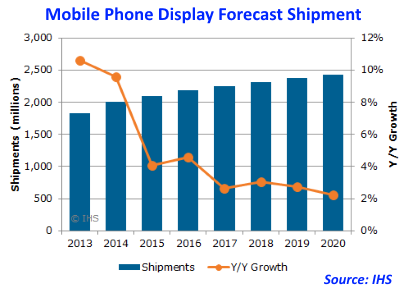 IHS forecasts a growth of just 4 percent for mobile phone display modules in 2015 sparking greater competition among players.BOE isn't the only Chinese vendor turning its focus to the mobile phone market, according to Yu. Tianma and InfoVision are also focusing their G5 capacity in the sector "placing strong emphasis on a-Si based mobile phone displays," he said.

However, Yu said that until these capacities are ready in China, competition for high-end mobile phone displays will be primarily centered on panel markets in other parts of Asia—specifically among Japan Display, Sharp and Samsung. All of these companies have aggressive plans for the high-end Chinese smartphone market this year, Yu added.