The demand for LED chipsets is forecast to increase substantially up until 2018 with demand for lighting taking over from display backlighting as the source of demand, according to DisplaySearch. DisplaySearch is a market analysis organization that was recently acquired by IHS Technology, the publisher of Electronics 360. 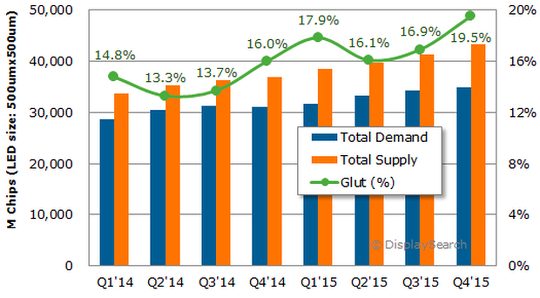 In 2014 the LED market became more integrated from chip to channel, as competing companies merged and supply-chain companies acquired LED industry companies. "The LED chip industry is expected to fare better than the LED package industry, as demand for lighting continues to increase through 2018," said DisplaySearch analyst Steven Sher, in a statement.

Chipset demand for LCD TV backlights is low due to sluggish TV demand and improved efficiency where fewer chips are used per backlight. Global demand for chipsets used for display backlighting flattened after 2012 and a slow decrease is forecast after 2014.