Last year, the global set-top box (STB) market achieved its highest annual revenue total in history with $20.3 billion. The good news is that revenues for this market will set new highs during the next two years, peaking at $22.8 billion in 2015, according to a report from IHS Technology.

This is good news for a market that struggled with growth in the prior three years when revenues hovered in the $19.5 billion range. 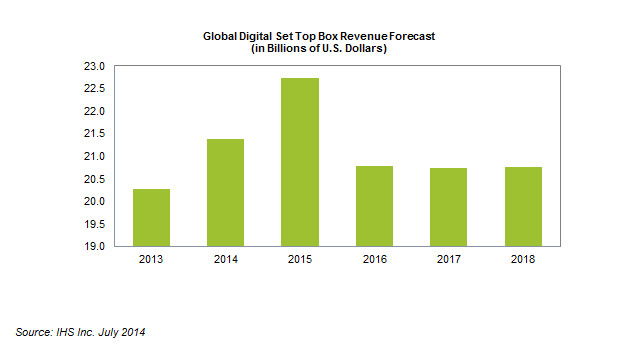 “Set-top boxes proved to be critical to the strategies of pay TV operators in 2013,” said Daniel Simmons, director for Connected Home research at IHS, in a statement. “Far from being pushed out of the living room by Internet-enabled consumer electronics, STBs are being repositioned as the hub of the connected home. STBs increasingly are being transformed into multimedia home gateways (MHG), which combine support for pay-TV services with Internet access, residential gateway services, Wi-Fi and other advanced features.”

Service providers are using MHGs to transition from legacy broadcast-based pay-TV experiences to those that are Internet-based and positioned to compete against over-the-top (OTT) rivals such as Amazon and Netflix. MHG reaching large scale deployment in North America is part of the reason or the growth in STBs in 2013 and in the years to come.

With a strong performance in MHG, U.K.-based Pace was about to retain its global No. 1 position in terms of units shipped in 2013 while Cisco lead all pay-TV STB vendors in terms of revenue.

IHS forecasts that as Comcast, DirecTV and Dish Network push out their MHG deployments, STB revenue will expand as the higher end of the market transitions. Meanwhile, other growth will come from China and India continuing to transition from analog terrestrial TV to digital, driving large volumes of value-based STBs. However, many of these projects will near completion in 2015 and the market will contract to $20.7 billion by 2018, IHS believes.

China Set-Top Box Market to Slow Down in Years Ahead