The conditional access (CA) technology market is reaching maturity. So much so that next year, the global market for CA technology in set-top boxes (STBs) will reach its highest revenue at $2.2 billion, according to a new report from IHS Technology.

Following 2015, revenues from CA technology inside STBs will begin a downward trend, bottoming out at $1.9 billion in 2018, according to IHS. 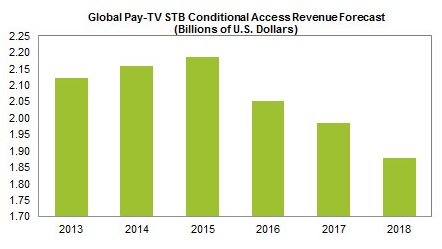 CA is defined as any method or technology that prevents digital TV content from being viewed by those without proper access. This technology can be embedded software in the STB or a smartcard or a CA module.

“The CA market is largely dependent on pay-TV growth,” said Wajahat Abbassi, senior analyst for Connected Home at IHS, in a statement. “Shipments of STB CA clients have grown strongly during the past 10 years, from 44 million units in 2003 to 246 million in 2013, driven by a decade of rampant pay-TV growth. However, this dependence will make further growth for CA challenging as the pay-TV market begins to slow.”

In 2014 and 2015, the CA market is due for expansion mostly because of new Chinese and Indian cable TV digitization programs and pay-TV growth associated in these emerging markets. This will increase the STB CA client shipments to 279 million units in 2015, IHS said. However, with software becoming the prevalent offering, revenue will be limited and the market will reach saturation levels by the end of 2015.

Globally, some 53 percent of TV-owning households will have pay-TV services by the end of 2015. Given such a large penetration rate, CA is destined to decline after its peak next year. This will largely impact Cisco Systems Inc., IHS said, as it held a 32 percent market share in 2013 of the total revenues in the CA market. Kudelski Group’s Nagravision has 27 percent market share in the STB CA market.