Despite the pay-TV industry’s increasing focus on delivering services to alternative devices like PCs, smartphones and tablets, its traditional flagship platform-- the set-top box (STB)—continues to thrive, with market shipments set to hit record highs in 2013, 2014 and 2015.

Global shipments of STBs used for cable, satellite, terrestrial and Internet protocol television (IPTV) digital TV services are forecast to climb to 269 million units this year, up 8 percent from 250 million in 2012, according to the latest Set-Top Box Market Monitor report from IHS. Shipments will grow another 6 percent to 286 million in 2014 and by 1 percent to 290 million in 2015. The year 2015 will represent the peak of the market for the foreseeable future, as presented in the attached figure. 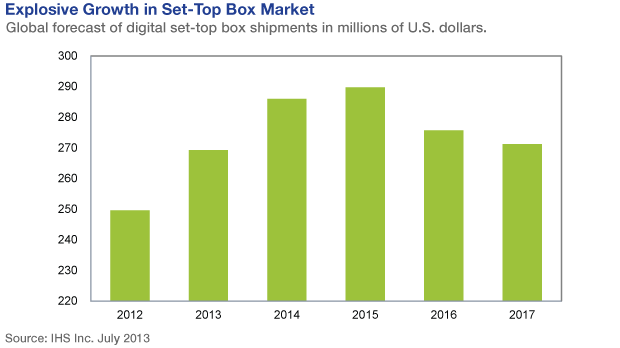 “STBs are facing a mounting challenge to their role at the dominant pay TV video consumption device because of operators’ growing emphasis on supporting multiscreen devices,” said Daniel Simmons, senior principal analyst for TV technology at IHS. “However, operators are continuing to deploy STBs in order to manage the compatibility between their delivery networks and the consumer electronics devices that consumers are increasingly using to view content now. As pay-TV operators rush to accommodate changes in delivery platforms and in video formats—including the adoption of high definition (HD)—STB shipments will continue to rise, hitting record levels for the next few years.”

Reports of the STB sector’s imminent demise have been fueled by the increasing prominence of multiscreen devices.

For example, IHS in 2012 noted that STBs’ domination of the pay-TV market is set to come to an end, with multiscreen devices accounting for nearly half of all platforms obtaining television services from the largest operators by 2015. Furthermore, pay-TV operators increasingly are focusing their attention on video delivery to multiscreen devices as they attempt to stave off the competitive threat posed by platform-agnostic over-the-top services like Netflix, Amazon and others.

However, this doesn’t mean that STBs will stop being used—or even that their shipments will stop rising in the near term. In fact, IHS expects pay-TV operators to continue to deploy STBs and utilize them as a central platform for video services.

Ironically, the multiscreen phenomenon will help boost the STB market during the next few years, as operators offer multimedia home gateway (MHG) STBs that can deliver services to PCs, smartphones, tablets and other devices, supporting the operator-as-an-app model.

Furthermore, in mature markets where pay-TV digitization is complete or nearly finished, the transition to HD and MHG STBs will help to sustain volumes and increase revenue in 2013, 2014 and 2015.

The gradual migration to HD is continuing, with 2014 expected to be the first year when more than 50 percent of pay-TV boxes shipped globally can support HD. These developments will allow STB industry revenue to grow to $22.2 billion in 2013, making it the most valuable year in the history of the market.

Further in the future, the STB market will get a boost from the rollout of Ultra High Definition (UHD) services, IHS predicts.

Volume growth for the STB market during the next few years will be driven by demand for more basic models, which are sold to support cable digitization in India. Shipments also will be propelled by terrestrial TV digitization in Central and Eastern Europe as well as South and Central America.

After hitting a record high in 2015, global STB shipments are expected to start to decline, decreasing by 5 percent in 2016 and by another 2 percent in 2017.

“The global transition from analog to digital TV will be almost complete by 2016, leading to a contraction in the overall number of STBs shipped,” Simmons said. “As this deadline approaches, the best-positioned vendors will be those that have developed the most technologically advanced STBs that will allow them to drive value in the developed markets, as well as those that can extract maximum margin from the emerging markets.”

Pace of the United Kingdom shipped 11.3 percent of all pay-TV STB unit shipments in 2012, retaining its status as the world’s largest vendor. French manufacturer Technicolor increased its shipments by almost 5 million units in 2012, allowing it to leapfrog Illinois-based Motorola and take second place in the market.

Growth in shipments was also a key driver in Cisco’s 2013 success, which saw it become the largest pay-TV STB vendor in terms of revenue. However, the now-consolidated STB businesses of Georgia-headquartered Arris and Motorola yielded combined pay-TV STB revenue that was larger than Cisco’s in 2012.