MWC: Riding the High-Speed Train Called the Internet of Things

What was crystal clear from this year's four-day mobile fête is that increased technology-powered mobility and always-on connectivity has already brought step changes to human behavior, and that machine-to-machine (M2M) communication is on an equal growth trajectory, but moving away from being dependent solely on the cellular network.

The Internet of Things (IoT) is everywhere–the connected life is becoming the norm on a city level, in office buildings, on the roads, in homes, and on a person's body. IoT once was a theoretical concept for increasing systems automation by assigning computer data representing the location and status of objects in the physical world. Now, it's evolved to providing real-time monitoring and interaction of people, things and machines, noted Bill Morelli, associate director of M2M and IoT at IHS.

On the ground at MWC, the migration to the broader category of IoT is becoming increasingly evident, too, said Sam Lucero senior principal analyst of M2M and IoT at IHS. While some companies may be reacting to the IoT's growing popularity and marketing hype, there is a "real recognition of the need for a multiplicity of connectivity technologies, and the need to provide access to data flows to third-party applications," Lucero said. He also noted that IoT now represents a much larger scale of devices and functionality (big data analytics, for example), relative to cellular M2M.

But, there's also chicken and egg game in play that can't be ignored. More technology has arrived in the world, and more people globally are using an increasing number of devices to manage various aspects of their lives; as people become comfortable using (mostly mobile) devices, apps and services, the more they want their machines to talk to each other and do even more stuff for them. So, new sets of devices and services aimed at improving machine-to-machine and people-to-machine interaction are brought to market. By 2016, there could be nearly 20 billion Internet-connected devices globally, a number that could soar to about 50 billion by 2020, according to IHS.

Besides staggering unit growth, whole new segments are opening up and inviting electronics products to solve a growing number of world problems.

Cities around the world want to implement smart M2M technology to manage traffic, waste collection and energy distribution and consumption (See MWC: Smart Living in Smart Cities). Unlike companies that have used M2M connectivity to address specific business problems, like tracking fleets of trucks or cargo containers, cities will have to take data from many different sources and create a broad solution where the sum is greater than its parts, Morelli said.

"Smart cities are seen as the a tangible first step towards making the business case for IoT," he said, adding that smart city pilot projects getting underway in places like Barcelona, Hamburg and London provide case studies that other cities may follow in the near future.

Dovetailing on the smart cities push, building developers and owners are applying similar sense-detect-respond concepts to control lighting, temperature, energy use and security, and electronics companies are stepping up to be solutions providers for that level of activity tracking.

"Smart buildings could be another first target for smart cities and for building sustainable smart cities business models," said Shinya Kukita, chief engineer for the Global Business Unit at NEC Corp. He added that smart building initiatives will primarily start with monitoring energy use, which could represent significant savings.

Automakers, too, are now hinging their reputations to their cars' ability to innovatively connect to the world and relay information to and from the cloud.

Another IoT hot spot hits the home front. Qualcomm built a three-room apartment as part of its MWC booth, and demonstrated how its chips and alliance with other technology partners is solving some of the well-known device interoperability issues plaguing IoT and M2M. The company had door locks, lights, speakers, televisions, a refrigerated wine cooler, air quality monitors sending information to and being controlled by touch-screen tablets and mobile phones.

Even the bathroom is no longer safe from the Internet of Things. Making its first appearance at MWC, Procter & Gamble debuted its Oral-B SmartSeries and the world's first electric toothbrush with Bluetooth 4.0 connectivity along with a corresponding Oral-B app. The company is bringing "Smartphone technology to toothbrushing for the well-connected bathroom," according to its website. 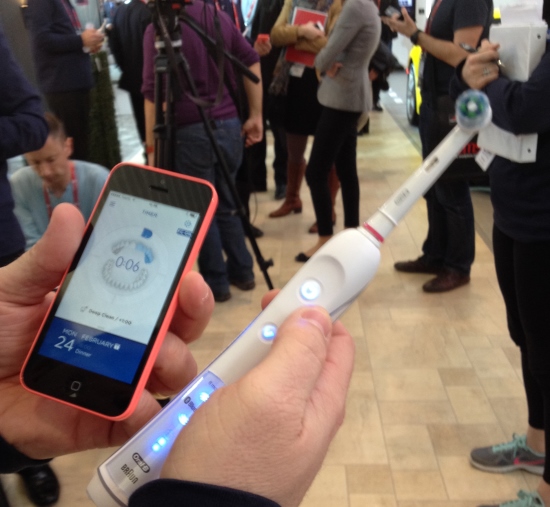 Yes, even toothbrushes now are part of the Internet of Things. Procter & Gamble was at the Mobile World Congress this year showing off its new Oral-B SmartSeries electric toothbrush with Bluetooth 4.0 connectivity.

And, an entirely new and promising market of wearable technology has been recently created, making it one of the most talked about areas during this year's MWC. Wearables' potential to propel personal activity monitoring will lead to an even greater number of apps, services and IoT connectivity options.

Of course, none of these advancements come without challenges. The biggest concerns raised by mobile executives centered on the overwhelming job of managing all the data streaming in and out of connected devices, ensuring adequate networking capacity to handle the data transmission and creating value-added services that appeal to end-users. 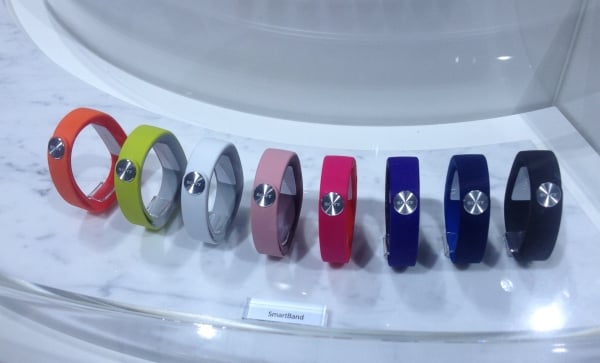 During her MWC keynote, IBM's CEO Virginia Rometty called data "the world's new natural resource," and said companies that can best manage it will reap competitive advantages. "I think we will look back at this time and see data as a resource that drove the 21st century," she added.

Mobile data is predicted to grow at a compounded annual rate of 61 percent between 2013 and 2018, said Robert Pepper, vice president of global technology policy at Cisco during an MWC seminar. Citing Cisco's Visual Networking Index studies, which track data usage and consumption, Pepper said mobile data traffic is expected to increase to 15.9 exabytes per month by 2018, up from about 1.5 exabytes per month the end of last year.

That means increased capacity concerns on the networking side and decisions about whether to use client-server, proximal or cloud connectivity to connect devices with people and the Internet, said Matt Grob, executive vice president at Qualcomm Technologies Inc. and chief technical officer at Qualcomm Inc.

Accorinding to Grob, "3G, 4G and WiFi will all have their place. 3G and 4G are highly reliable and scalable for some applications, but not for everything, and 5G will be used for mission critical applications, but that will take time to develop,"

In the meantime, telecommunications companies, mobile virtual network operators (MVNOs) and others playing in the M2M space are looking for ways to optimize their position as IoT takes stronger hold.

"Network infrastructure vendors are emphasizing virtualized core network functionality. A number of M2M MVNOs have focused on 'M2M tailored' core network solutions as a differentiator. But if network virtualization takes hold for mainstream telecom services, it may be much simpler for telcos to deploy the same type of functionality quickly, which would further reduce the advantage MVNOs have tried to carve out for themselves in the M2M space," added IHS' Lucero, who was at MWC talking to various company executives.

He added, too, that "there was continued emphasis by the telcos and others of the desire to 'move up the value stack' and provide value-added services, such as data analytics and hosted call center support, as opposed to 'simply' connectivity."