The 32GB version of Hewlett-Packard Co.’s new TouchPad media tablet carries a bill of materials (BOM) of $318, according to the preliminary results generated by the IHS iSuppli Teardown Analysis Service from information and analysis provider IHS (NYSE: IHS).

The table below presents the preliminary estimate of the TouchPad BOMs and manufacturing costs from the IHS iSuppli Teardown Analysis Service. Please note that the assessment accounts only for hardware costs and does not take into consideration other expenses such as software, licensing, royalties and other expenditures. 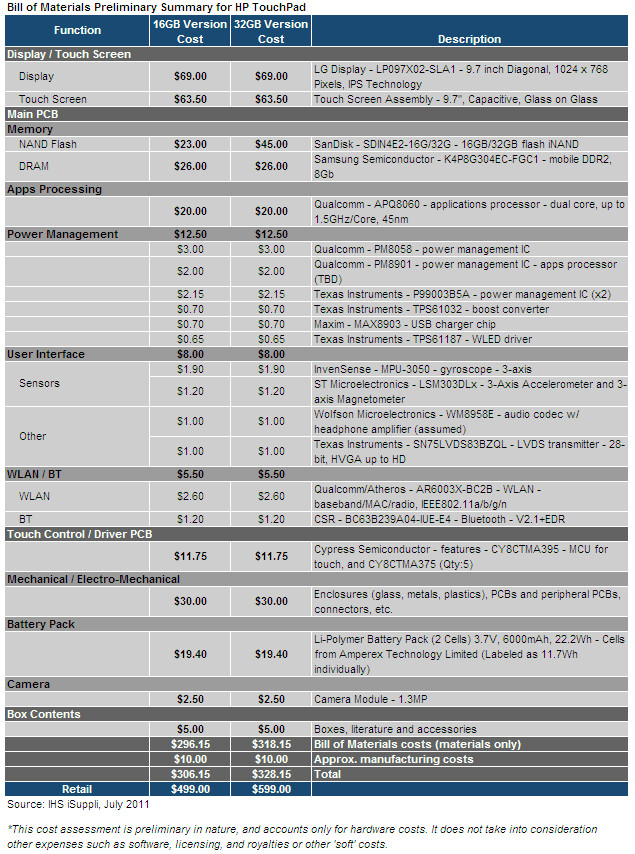 While the TouchPad media tablet invites comparisons with the genre-defining iPad from Apple Inc., the similarities only go so far when assessing the two products’ relative features and design.

“The TouchPad in some ways does closely resemble the original iPad, with its use of the same LG display Apple used in the first-generation iPad, and by initially offering a product that only employs Wi-Fi as its exclusive wireless connection,” said Andrew Rassweiler, senior director, teardown services, for IHS. “However, there are major differences between the two platforms. For example, unlike the iPad, the TouchPad does not try to push the design envelope with an ultrathin form factor or in the use of exotic materials. HP’s choice of plastic enclosure adds to the increased thickness of the device, which also results in the density of the electronic design being much lower compared with Apple products. Furthermore, the TouchPad also features a built-in wireless charging system, something we haven’t seen in other tablets to date.”

Where the TouchPad really stands apart from all the media-tablet competition is in on the software side, with its use of the web OS operating system, derived from the popular Palm OS developed by Palm Inc. which was acquired by HP in 2010. As it faces off against the iPad and a sea of Android-based alternatives, webOS provides the clearest point of differentiation for HP’s TouchPad.

Thicker than Water
One notable design shortcoming for the TouchPad compared to the iPad 2 comes in the area of thickness, a key allure that makes the Apple device desirable to consumers. The TouchPad is 13.7 millimeters thick, while the iPad 2 is a slim 8.8 millimeters.

“With the TouchPad design, HP obviously is not participating in the tablet thickness wars that Samsung is waging with Apple,” Rassweiler said. “In contrast to the iPad 2’s aluminum shell, the TouchPad’s enclosure is plastic, which means it is less rigid, and also requires the use of an additional internal frame for mounting internal components. This significantly adds to the overall size of the tablet in terms of thickness and around the edges. On the other hand, the thicker design means the TouchPad doesn’t have to resort to the kind of exotic packaging, components and printed circuit board (PCB) layouts seen in the iPads, helping to simplify the design process, and giving HP more design options.”

With space at much less of a premium, the TouchPad’s PCB appears to be sparsely populated with integrated circuits and other components compared to the dense electronic layout of the first- and second-generation iPads. Some of this extra board space may be filled with wireless components in a future 3G version of the TouchPad, Rassweiler speculated.

In the Loop
The TouchPad features an inductive loop or coil mounted in the rear of the enclosure, which enables wireless battery recharging. The system, dubbed Touchstone, recharges the battery when the TouchPad is placed on top of an inductive charger. Although the TouchPad is prewired for this feature, it requires the optional Touchstone charger to make it work. Touchstone previously was used in the Palm Pre smartphone.

Display Doppelganger for TouchPad and iPad
The display in the TouchPad appears to be the same as that seen in the first-generation iPad: a 9.7-inch, 1,024 by 768 pixel resolution liquid crystal display (LCD) using in-place switching (IPS) technology. The display is supplied by LG Display Co. Ltd. Priced at $69.00, the display subsystem is most expensive portion of the TouchPad design, accounting for 21.7 percent of the 32GB version’s total.

The capacitive, glass-on-glass touch screen assembly is the next most costly subsystem at $63.50, or 20 percent of the BOM. While it’s not possible to identify the touch screen assembly supplier via teardown analysis, IHS iSuppli believes two likely sources for this component are Wintek Corp. and TPK Holding Co. Ltd.

Setting Memory Standards
Next on the cost countdown is the NAND flash memory, priced at $45.00 for the 32GB version, and representing 14.1 percent of the BOM. The NAND is used for storage of data, such as apps, video, audio and images. In the individual TouchPad torn down by IHS iSuppli, SanDisk Corp. supplies these NAND parts, which are based on the company’s semi proprietary iNAND standard.

The mechanical/electromechanical subsystem is the fourth most expensive portion of the TouchPad, costing $30.00, or 9.4 percent of the BOM. These devices and materials comprise the enclosure, plus the PCBs and connectors.

The mobile DRAM portion of the system, made by Samsung Electronics Co. Ltd., is priced at $26.00, or 8.2 percent of the BOM. The TouchPad employs 8Gb of mobile double data rate (DDR) 2 DRAM, an extremely high density.

“Compared to the typical density of 4Gb in other tablets, 8Gb of DDR2 represents a large amount of mobile DRAM,” Rassweiler said. “And it comes with a hefty price tag. In the 16GB model, it’s pricier than the NAND flash, which in the past represented the biggest memory cost-contributor, by far. Despite this, we expect 8Gb of DRAM to become the new standard for tablets, as memory pricing continues to erode on a cost per byte basis.”

“While the IHS iSuppli teardown analysis service has identified many Qualcomm solutions in the past, this is the first time we have seen a standalone Qualcomm applications processor without the usual accompaniment of wireless functionality Qualcomm is famous for, such as 3G capability,” Rassweiler said. “Future versions of the TouchPad likely will employ a more complete Qualcomm solution, allowing them to access 3G wireless services.”

Fat Battery
The battery pack is priced at $19.40, accounting for 6.1 percent of the BOM. The TouchPad utilizes a two-cell lithium-ion battery from Amperex Technology Ltd.

“With its use of two cells, the TouchPad battery pack is very similar to that of the first-generation iPad,” Rassweiler noted. “This contrasts with the iPad 2, which resorted to employing three thinner cells instead of two thicker cells to achieve its slimmer form factor.”

Powerful Power Management
Next on the cost list is the power management subsystem, at $12.50, or 3.9 percent of the total BOM. The system features six major integrated circuits supplied by Qualcomm, Texas Instruments Inc. and Maxim Integrated Products Inc.

“There's a whole lot of power management going on in the TouchPad,” Rassweiler said. “This is a trend we have noted since the arrival of the original iPad: a seemingly disproportionate amount of power management implemented in media tablets. This appears to be the natural consequence of manufacturers prioritizing battery life as key to the tablet experience, especially where battery packs are limited by cost and size constraints.”