As with all engineering decisions, assessing the risks of adopting a new technology requires demonstrating that the benefits of implementation outweigh the costs. The accuracy of that analysis depends on the validity of all boundary conditions and assumptions, as well as an accurate characterization of that great unknown – the future. Small errors in assumptions will probably not invalidate a go/no-go decision. But the farther out you have to project a break-even point, the more likely errors may affect that decision.

So consider the investment in solar photovoltaic (PV) technology. Utilities, companies, and home owners all base their buying decision on the expected life of the system. That decision can prove costly if the actual lifespan is significantly shorter than the one predicted.

Suppose, for example, a company projects overall energy savings of installing a solar PV system on the roof of its factory to exceed the initial investment within 10 years. If the panels last 15 years, the company more than breaks even. But if it turns out that the panels’ useful life is less than 10 years, the aggregated benefits will fall short.

Today, industry experts generally assume that solar panels have a lifespan of about 25 years. But many large installations of current-generation solar PV systems are no more than a few years old. How confident are the solar PV companies that their systems will last for another two decades? And how realistic are the assumptions they use to make that claim?

Various publications, including the New York Times, have reported anecdotal evidence that some panels have begun to degrade or fail prematurely. If this anecdotal evidence turns out to be a broad-based quality issue, the blossoming solar industry could get derailed.

Some industry pundits have speculated that the quality problem stems from cost-cutting measures at some solar PV manufacturers. Perhaps the cited cases are only aberrations or outliers suffering from “sampling bias” and are not a broad-based trend. Perhaps not.

So how can the solar PV companies accurately predict the quality and longevity of their photovoltaic systems? Device failures in general follow the well-known “bathtub” curve, with a high “infant-mortality” failure rate at the beginning, then an extended period with few failures when the systems are out in the field, followed by a rising failure rate at the end of life. 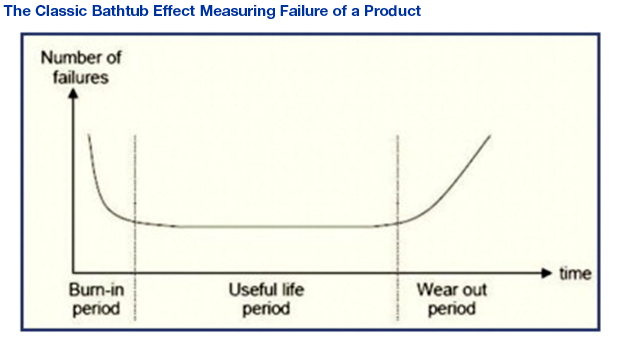 Environmental stress screening techniques such as burn-in, temperature cycling, vibration, and the like should encourage marginal components to fail before they leave the factory. Some form of destructive highly accelerated life testing (HALT) could predict the length of the flat part of the bathtub curve. One would expect that solar manufacturers are performing tests to justify their claims of a 25-year lifespan. But it’s far from certain this is the case.

The Photovoltaic Manufacturing Consortium (PVMC) has called for a test that can predict a panel’s 25-year lifespan in less than 1,000 hours (6 weeks).

According to the PVMC, “we need to identify and, more importantly, understand any and all failure mechanisms that may be operating under a wide variety of conditions. In addition, as the technology keeps evolving, how the performance is affected by material improvements needs to be established. The desired lifetime for a PV product is 25 to 30 years, and the industry must find a way to evaluate whether a product will achieve such a lifetime through a more convenient time scale.”

The solar PV industry is starting to show signs of renewed growth. The need for a reliable global standard technique for predicting (and improving) the lifespan of the product is imperative for that growth to continue.