Solar PV Poised For Rebound in 2013

After two years of freefalling prices and thinning profit margins, manufacturers in the solar photovoltaic (PV) market are expected to see stabilization -- and even some growth -- in 2013, according to IHS analysts during the June 25 Webinar “The Solar PV Market: Year of the Turnaround.”

For the solar PV industry, 2011 and 2012 were a disaster. The uncertain global economy prompted governments to hold back on solar power subsidies, and new competitors from China emerged in growth markets such as the EU. Low-priced Chinese modules drove both prices and profit margins down. And while demand for solar PV continued to grow in 2012 in unit terms, that wasn’t reflected in manufacturers’ revenue.

One catalyst in the turnaround saga is the EU’s tariff on Chinese modules imposed earlier this month. Prices of Chinese goods are expected to increase, and this pressure may prompt Chinese vendors to exit the EU market. That’s welcome news for vendors, even if the EU’s demand forecast for solar PV has been adjusted downward for 2013 due to overcapacity and an ongoing sluggish economy.

Still, IHS expects overall global growth in solar PV installations to increase by 11 percent in 2013 and for the solar supply chain to return to balance as overcapacity begins to wane. Average selling prices (ASPs) for modules -- on a steep decline since 2012 -- are now stabilizing due to the antidumping tariffs, said Stefan de Haan, principal analyst for IHS Solar Solutions, during the webinar. He expects prices to decline moderately through the end of 2013.

The solar PV industry is on the brink of what IHS analysts call the post-subsidy market. Incentives that drove installations in the EU aren’t expected to return any time soon, and the solar PV market is realigning itself on several fronts. Geographically, demand is now being driven by China, Japan and the United States — not by the EU. Markets are also becoming more fragmented: in 2010, the five largest markets in the world accounted for 83 percent of solar PV installations. That’s dwindled to 69 percent in 2012. 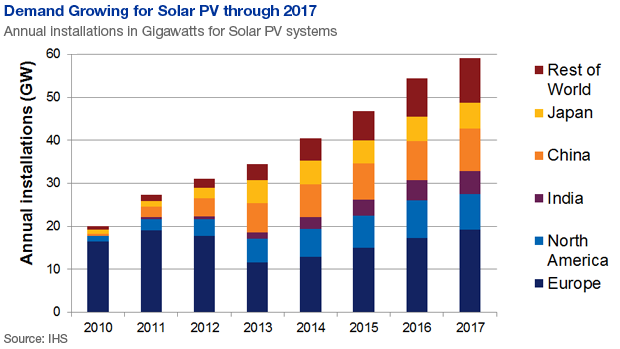 There are other shifts taking place: Crystalline technology is rapidly overtaking thin-film in PV module production. But the most dramatic shift is happening in the PV inverter market. “There’s a big movement toward three-phase low-power inverters in commercial systems,” said Sam Wilkinson, research manager, IHS Solar Solutions. “These are replacing single-phase inverters because there’s less disruption associated with an inverter failure. If one three-phase inverter fails, only a small part of the system goes down. They can also be replaced more easily, whereas a single-phase inverter would require repair.”

Pricing pressure does have its upside for solar PV. As system prices decline, solar is poised to enter new markets in residential, commercial, utility and off-grid applications. Instead of relying on government subsidies, these markets will be self-sustaining, according to de Haan. In Germany, for example, costs for solar PV generation have fallen below commercial electricity prices, prompting businesses to invest. For example, one German supermarket chain has installed a solar PV system that will generate 45 percent of its annual energy requirements.

This self-consumption model provides some compelling cost savings. To be sure, solar energy that’s generated and then passed through the grid carries a significant price premium. So as users are able to store solar energy, they can utilize it during peak hours when electricity prices are at their highest. “The sun is, of course, the power-generating factor and there is little control there,” de Haan said. “But as you introduce storage, there is more control over power and a smoother flow of electricity.”

The PV energy storage market is forecast to reach nearly $30 billion in 2017, according to IHS.