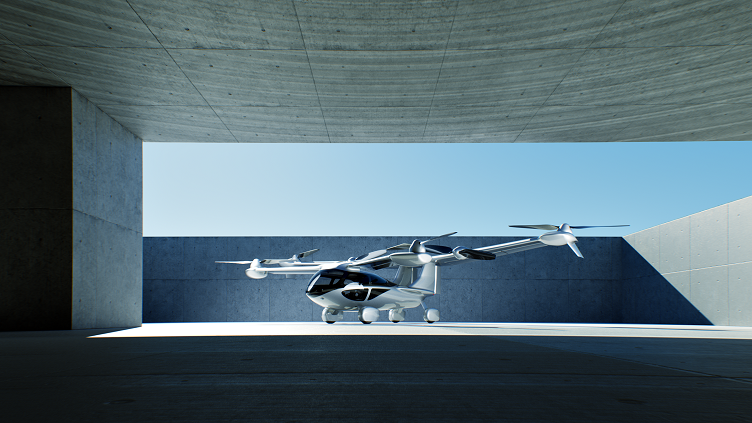 An artist rendering of the A5 which is claimed to be the first four-seat electric verticial takeoff and landing (eVTOL) flying car that travels on roads and through the air. Source: Aska

What is being called the world’s first four-seater electric vehicle (EV) that can travel via road and up to 250 miles via air on a single charge will make its debut at CES 2023, taking place Jan. 5-8 in Las Vegas.

The Aska A5 is the first in a planned fleet of electric vertical takeoff and landing (eVTOL) flying cars that will be used as an on-demand ride service operating in major cities.

Aska said the full-scale prototype will take advantage of the global road infrastructure while also being used to fly to destinations outside of the normal commute pattern. Additionally, the flying car could potentially be used in emergency response, by the military and emerging on-demand ride-sharing and ride-hailing mobility services.

The company said the flying car will require minimal infrastructure as it can take off from a compact space such as a helipad or vertiport and will fit into existing parking spaces. It can be charged at home or at EV charging stations and contains a range extender engine that runs on gasoline.

Flying car as a service

Aska wants to develop the A5 as an on-demand ride-sharing service for major cities and surrounding areas. The company is targeting this for a 2026-time frame and will have certified pilots pick up customers at their homes and fly them to their destinations.

Both the pre-order for the flying car and the on-demand service is now available.

The A5 engine is a proprietary power system featuring lithium-ion battery packs and a gasoline engine for extension of range. The dual energy source allows for 250 miles of flight range.

In driving mode, all four wheels are placed outside the fuselage for all-wheel-drive traction and maximizing the interior space to seat four passengers. In the flying mode, the vehicle’s wings with six rotors unfold, allowing the vehicle to take off vertically or do conventional runway takeoffs. Aska said the large wing is optimized for gliding, landings and efficient energy consumption.