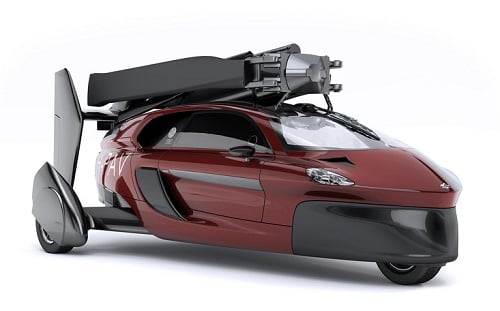 PAL-V’s prototype flying car that is now available for pre-order. Source: PAL-VFlying cars may seem like science fiction but with a number of automotive OEMs, start-ups, aerospace companies and other making strides in the technology, flying cars could be a reality in under a decade.

In fact, the market is poised to see more than 10 companies introduce flying cars by 2035, according to new research from Frost & Sullivan.

“It will be interesting to see the first applications of flying vehicles. Although the ultimate goal of manufacturers is to address the issue of personal mobility, commercial applications are expected to commence through recreational activities in the form of what could be termed as a single seater flying scooter,” says Sarwant Singh, senior partner at Frost & Sullivan. “From flying vehicle rides in amusement parks, aerial sightseeing of landmarks, to a star attraction at events, the recreational potential of flying vehicles is limitless.”

While the majority of these flying car companies are coming from the U.S., there are other companies from countries such as the U.K., France, Germany, Russia, Slovakia, Israel and Japan that are playing in the market.

Among the companies expected to launch flying vehicles by 2022 are PAL-V, Terrafugia, Aeromobil, Ehang, E-Volo, Urban Aeronautics, Kitty Hawk and Lilium Aviation. Each of these companies have at least one test flight of their flying car prototypes, Frost & Sullivan says. PAL-V and Aeromobil are accepting pre-orders for their flying cars with PAL-V’s expected by the end of 2018 and Aeromobil by 2020.

Frost & Sullivan will discuss its flying car research and other mobility technology trends at its Intelligent Mobility event taking place on June 29 in London.