Every month, Electronics360 Contributing Editor Abe Michelen surveys academic and technical journals to uncover promising research that will affect the development of “over the horizon” commercial products and, in turn, impact our lives in the future.

Last month, researchers at Stanford University announced the development of zinc-air batteries possessing very high energy and power density, as well as even higher catalytic activity — but were less expensive than batteries made with platinum and iridium – that could be used as primary and rechargeable batteries. These batteries require active and durable electrocatalysts in the cathode side in order to catalyze oxygen during discharge (oxygen-reduction reaction) and to produce oxygen (oxygen-evolution reaction) during discharge. This development of such a battery — whose results were published in the online version of the Nature Communication Journal – could lead to the fabrication of a low-cost alternative to the conventional high-cost lithium-ion batteries in use today.

“There has been increasing demand for high-performance, inexpensive and safe batteries for portable electronics, electric vehicles and other energy storage applications,” confirmed Hongjie Dai, Ph.D, the lead author of the study, from the chemistry department at Stanford.

To be sure, most of the attention recently has been given to the development of lithium-ion batteries despite the limited energy that can be stored per unit-volume capability (energy density), as well as their high cost and big safety problems.

The most viable construction – technically and economically – is the combination of zinc and air, according to Dai.

The design of these batteries, as developed by the Stanford researchers, calls for the combination of atmospheric oxygen and zinc metal in a liquid alkaline electrolyte to generate electricity during the charging process, with zinc oxide resulting as a by-product. When this process is reversed during recharging, oxygen and zinc metals are regenerated. Zinc-air batteries make use of the abundance and low cost of zinc metal, as well as the non-flammable nature of aqueous electrolytes.

The scientific community was very excited more than 10 years ago about a then-new combination of materials that promised to be the key for the development of “spintronics,” a new generation of electrical devices that makes use of the spin and momentum of electrons while operating on nanoscale properties. The manganese-gallium nitride structure developed at the time, however, was stable only at temperatures above 100°C. After trying to create low-temperature bonds, the scientific community abandoned the effort for lack of progress.

A new study conducted by researchers at the University of Ohio has found a way to create stable and uniform layers of this unique combination of materials. “We found a way – at least on the surface of the material – of incorporating a uniform layer,” said Arthur Smith, a professor in physics and the leader of the group. Smith and his cohorts reported in the June 2013 issue of the journal Physics Review B upon the stability of the manganese-gallium nitride bond. To make the merger, the University of Ohio scientists used the polarity of the nitrogen atom to attach the manganese atom to the gallium-nitride. This made a fundamental difference. Previously the bond was made between the manganese and the gallium in the gallium nitride structure.

Still required is determining whether this new chemical structure has the magnetic properties needed at room temperature to produce spintronic devices. The figure below shows a computer depiction of the structure of the new material. 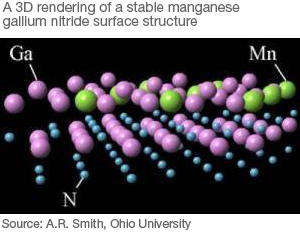 A group of researchers, led by Dr. Liam Britnell from the University of Manchester in the U.K., reported in the online edition of Nature Communications upon the creation of the first graphene transistor with bistable characteristics.

Bistability means that a system or device can switch, spontaneously, between two electronic states. The switching between the two states is normally triggered by a small signal or perturbation. These systems can emit a very-high-frequency electromagnetic wave (in the radar and infrared spectrum), and are very important elements in the design of security and medical imaging devices. The researchers at the University of Manchester found that by using graphene as an active material in the transistor, the switching rate is in the order of trillions of switches per second.

This transistor consists of two layers of graphene (a material first created at the University of Manchester in 2004), separated by a very thin layer of boron nitride that operates as an insulating material (barrier). The electrons can move at high speed between the two graphene layers by applying a small voltage. However, because the insulating barrier separating the two graphene layers is very thin, the electrons “jump” from one graphene layer to the other through a phenomenon called “quantum tunneling.” This process produces a very fast motion of the electrons, thereby creating the emission of high-frequency electromagnetic waves.

"For more than 40 years, technology has led to ever-smaller transistors, a tour de force of engineering that has provided us with today's state-of-the-art silicon chips which contain billions of transistors,” said Britnell.

“Scientists are searching for an alternative to silicon-based technology — which is likely to hit the buffers in a few years' time — and graphene may be an answer. Graphene research is relatively mature, but multi-layered devices made of different atomically thin materials such as graphene were first reported only a year ago. This architecture can bring many more surprises," he added.

"In addition to its potential in medical imaging and security screening, the graphene devices could also be integrated on a chip with conventional or other graphene-based, electronic components to provide new architectures and functionality,” said Professor Laurence Eaves, one of the researchers.