For decades the semiconductor industry has been packing more and more silicon transistors onto each computer chip to keep steadily improving performance, but that process will soon reach its physical limits. As silicon transistors become smaller and smaller, performance suffers. New materials are needed to continue to shrink transistors and speed up computation. Increasingly scientists are looking to silicon’s neighbor on the periodic table, carbon. Specifically, carbon nanotubes (CNTs) and graphene. 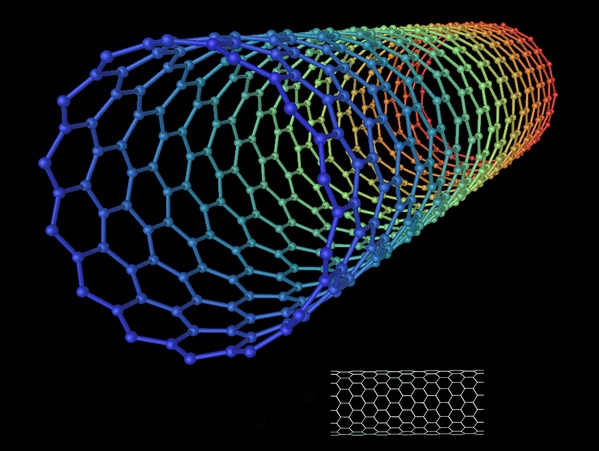 When Sumio Iijima of NEC published his discovery of single walled carbon nanotubes (swCNTs) in 1991, it initiated a flurry of excitement and inspired many scientists to start investigating their properties. CNTs are cylindrical structures made of carbon. They can be thought of as a sheet of graphene (a single-layer
hexagonal lattice of carbon) rolled into a cylinder. CNTs can be millimeters long with sub-nanometer diameters, leading to extreme aspect ratios. They can also have an interesting range of physical, thermal and electronic properties that are dependent upon their diameter, length and chirality.

CNTs can be single walled nanotubes or have multiple walls, with cylinders inside of cylinders and their electrical character can vary from metallic to semiconducting. Soon after their discovery it was realized that CNTs could come in many varieties with varying useful electronic properties. Certain CNTs are known to have high electrical conductance, high electron mobility (100,000 cm2⋅V−1⋅s−1 Source: http://pubs.acs.org/doi/abs/10.1021/nl034841q), and can carry a huge amount of current before structural failure.

Graphene attached to metal surfaces was observed in electron microscopes as early as 1962, but it wasn’t isolated and characterized until 2004 by Andre Geim and Konstantin Novoselov at the University of Manchester. Their research was guided by existing theoretical descriptions of its composition, structure and properties, and their work launched a flurry of research similar to that of CNTs in the 1990s.

Graphene is a single atomic layer of crystalline graphite. It was previously thought that two dimensional crystals, such as graphene, could not exist because they were thermodynamically unstable and would melt when isolated. However when Geim and Novoselov successfully isolated graphene, they found it stable up to high temperatures. Since its discovery, research on graphene has exploded both due to the ease with which the material is isolated and its numerous unique and interesting properties. Techniques for constructing graphene have improved over time. In the beginning the method used was using Scotch tape to remove graphite layers one at a time. Now techniques such as chemical vapor deposition (CVD) are being used to more precisely control the graphene's two dimensional size and shape.

Since graphene is a single atomic layer of crystallized carbon, electrons that travel through the material only have two free dimensions to move, which gives rise to many interesting properties. For instance, electron transport through graphene is very fast, making it a material with one of the highest electron mobilities (200000 cm2⋅V−1⋅s−1 Source: https://arxiv.org/abs/0802.2389 ). Another interesting property is the band structure of graphene, which causes electrons to no longer follow simple quantum mechanics, but actually behave like relativistic quantum particles. This is despite the fact that electrons in graphene are not actually relativistic (the electrons velocity is much less than the speed of light), they only behave as such.

One of the most obvious applications of CNTs and graphene are as highly conductive transparent films, due to their high conductance, high aspect ratio and physical strength. This could offer a lighter, stronger transparent material with better electrical properties for touch screens and displays. Another intriguing application, due to both CNT’s and graphene’s very high electron mobilities, would be ultrafast switching transistors. Finally, due to their electrical and thermal properties, CNTs and graphene could help electronics get even smaller.

IBM has shown that CNT transistors can operate at 10 nanometers with the potential to operate down to 1.8 nanometers. This is important since silicon transistors are quickly reaching their physical size limits. The last few generations of silicon chips have struggled with compromised performance as transistor size has shrunk. CNT based chips by contrast would be smaller, better performing and require less power consumption. IBM estimates that chips made with CNTs will be available as soon as 2020, having already achieved CNT chips with 10,000 transistors. [Source: https://www.technologyreview.com/s/528601/ibm-commercial-nanotube-transistors-are-coming-soon/ ]

Before silicon based chips are replaced, manufacturing chips out of a new material would have to be cost effective, something that has not yet been achieved with CNTs or graphene. However there is no question that both CNTs and graphene far outperform silicon. What’s more, new CNT and graphene based materials are emerging through research. Doping CNTs or graphene has been shown to produce interesting properties and improvements in electrical properties. There has even been new types of carbon, such as nano diamond threads, that have been developed and are being researched. Ultimately we have reached a fundamental limit in silicon and the future in increasingly starting to look carbon based.