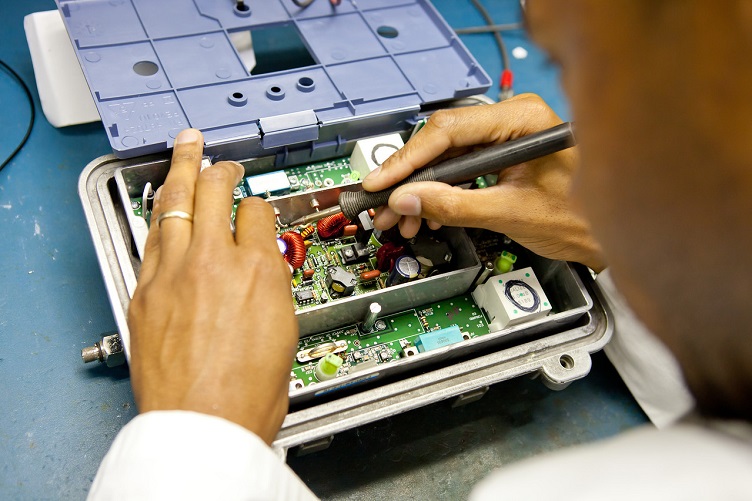 An Avnet engineer works on a device in a factory floor. According to a new survey, manufacturing is one of the biggest trends happening in IoT design this year. Source: Avnet

Newark, a division of Avnet Inc., has named the top trends happening in internet of things (IoT) design for 2022 in a new survey conducted by the company of engineers and designers.

The survey highlights the opportunities and challenges facing engineers and system designers working in the IoT sector. The survey found that while IoT is growing in deployment and designs, there is not a single defining IoT application due to the multiple industries where IoT is applicable.

“Many businesses are finding new and inventive ways to incorporate IoT hardware, software and cloud-based applications across a diverse range of industry sectors,” said Cliff Ortmeyer, global head of technical marketing at Newark. “However, it’s challenging to identify a core driver outside of what is already working for them within their immediate scope of work. Nevertheless, the migration to a world benefiting from the IoT is only set to grow and warrants our investment in future annual surveys.”

[Discover more about IoT software and systems on GlobalSpec.com]

Newark said the deployment of artificial intelligence (AI) in IoT systems was one of the most dramatic changes happening in 2022 as engineers have become better informed and more willing to deploy AI as they find ways to use it to improve products and increase return-on-investment of designs.

In Newark’s survey, 56% of engineers responded that they are using AI in some fashion. Last year, only 39% said they were using AI in IoT designs. Another 26% of those that responded said they expect to at least consider using AI in the future. Newark said this suggests disparate sectors are becoming comfortable with AI deployment.

The industrial IoT (IIoT) has been growing steadily since the inception of linking multiple devices together through connectivity.

According to Newark’s survey, about 30% of engineers responding said that IoT for manufacturing is the bedrock of productivity improvements and have already adopted the technology for their companies. Of all the areas where IoT is used, manufacturing appears to be the most comfortable with the technology and remains a barometer for how much adoption will take place in the coming years as well as how productivity will progress.

Another trend in IoT adoption in 2022 is the concern over the numerous options for using IoT devices when it comes to communications and connectivity.

Currently, engineers and designers have the options of wired, wireless, Bluetooth, LoRaWAN and many others. This can be challenging, especially when a designer must make their device compatible with the host system environment when it is unclear as to which communication option is integrated.

So engineers are facing challenges of having to design devices with all connectivity options in place or risk their design in choosing a handful that may or may not be compatible.

The fall of private cloud services

The influx and availability of Amazon Web Services, Microsoft’s Azure and Google Cloud are too compelling for many engineers and designers to pass up.

According to Newark’s survey, private cloud services as a result are falling out of favor with engineers and designers as the advantages from these big three companies is too great.