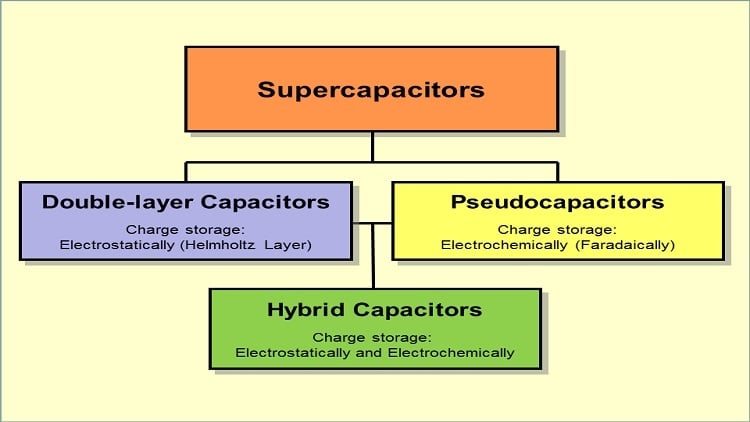 The increased demand for energy distribution and storage in our daily lives is being driven by the need to power an expanding range of portable gadgets and electric cars. Simultaneously, implementing intermittent renewable energy conversion devices such as wind turbines and photovoltaics on a wide-scale requires energy storage systems to regulate temporal swings ranging from seconds to hours. Among available energy storage methods, electrochemical energy storage (EES) has proven extremely effective because of its high theoretical efficiency of chemical to electrical energy conversion and the high energy and power densities provided by solid-state electrodes.

One technique for accomplishing this aim is by using pseudocapacitive materials that store charge via near-surface Faradaic reactions or reversible surfaces. These materials enable overcoming the capacity and mass transfer constraints of electrical double-layer capacitors and batteries. Solid-state electrodes provide EES by the following multiple processes:

Ion insertion and surface redox processes have been designated as pseudocapacitive as their thermodynamic and kinetic properties may be characterized using identical mathematical models as surface desorption/adsorption.

The word pseudo derives from the Greek "pseudes," which means "false" or "lying.” Thus, the term "pseudocapacitive" refers to an electrochemical mechanism that looks to be capacitive but is actually caused by charge transfer events at the electrode/electrolyte junction. The last decade has seen an explosion of interest in this process, owing to the proliferation of synthesis techniques that produce nanostructured or extremely chaotic redox-active materials, several of which display a pseudocapacitive reaction. The motivation is derived also from the potential technological significance of pseudocapacitance in enabling high-power, high-density energy storage.

The technical goal for developing pseudocapacitive electrode materials is to escape the kinetic constraints associated with lithium-ion batteries while obtaining energy densities greater than electrical double-layer capacitors. Pseudocapacitance is not restricted to a single kind of cation or anion and hence fits nicely with the quest for materials and processes for energy storage other than lithium. In the early 1960s, the term "pseudocapacitance" was used to characterize surface Faradaic phenomena like hydrogen adsorption and underpotential deposition. This was expanded to energy storage in the early 1970s after it was discovered that thin films of hydrated ruthenium oxide cycling in an acidic electrolyte displayed cyclic voltammograms similar to those of capacitors, but not single-crystal ruthenium oxide.

Electrochemical pseudocapacitors make use of conducting polymer electrodes or metal oxides that have a high electrochemical pseudocapacitance in addition to the double-layer capacitance. Pseudocapacitive materials undertake reversible electrochemical reactions in substantially shorter time frames, sometimes equivalent to electrical double-layer capacitors, while yet having a high charge storage space equivalent to that of batteries. They have cycle stability that is comparable to that of electrical double-layer capacitors and lithium-ion batteries. Although the precise atomic mechanism is unclear, it is frequently attributed to highly reversible surface or intercalation charge transfer processes, which are not constrained by solid-state diffusion.

Pseudocapacitive materials show great promise for creating high energy density, high rate and high-efficiency energy storage devices based on ion intercalation and adsorption at the same time. They can be included in hybrid capacitors or rechargeable batteries as electrodes. Nevertheless, the following two elements of incorporating pseudocapacitive materials into electronics requires more study:

These elements are anticipated to acquire significance as additional pseudocapacitive materials are developed and incorporated into devices.

[Discover more about capacitor technology and manufacturers on GlobalSpec.com]

Globally, there is an urgent demand for electrochemical energy storage that incorporates materials capable of delivering both high energy density and high power. While traditional lithium-ion batteries have a high energy density, their rate performance is typically suboptimal. By contrast, the surface Faradaic redox pseudocapacitance exhibits exceptional rate performance.