Wing to begin drone delivery service in Texas this week 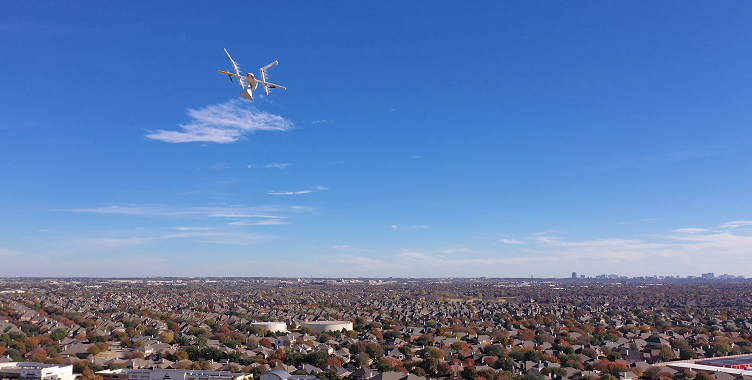 The delivery service in the Dallas metroplex will begin in the suburbs and then extend to other areas later. Source: Wing

Wing, the drone delivery arm of Alphabet, will begin services in the Dallas-Fort Worth metroplex in Texas beginning this week.

The service is billed as the first metro drone delivery service in the state with operations co-located and integrated with local retail businesses including Walgreens.

The service will start small with service to tens of thousands of suburban homes in the city of Frisco and the town of Little Elm. Later, the company plans to expand service to surrounding areas.

Wing has staged drones at a local Walgreens store to fly health and wellness products directly to customers. It is also partnering with Blue Bell Creameries to deliver ice cream, with easyvet to deliver prescription pet medications and with Texas Health to deliver first aid kits.

When the service is launched, Wing will send residents information about which neighborhoods will be invited and how to check for eligibility as well as place orders. Wing suggested that everyone who lives within range of the drones will be able to order on the first day.

Earlier this year, Wing said it crossed the 200,000 threshold for commercial deliveries across its global markets, the majority of which took place in Logan, Australia. Wing boasts that it is now delivering goods by drone once every 25 seconds.

It also started delivering Kentucky Fried Chicken (KFC) menu items to customers in Logan earlier this year. It signed a similar deal with Roll’d, a Vietnamese food chain, to deliver Bȧnh mi or Bao to customers via drone.