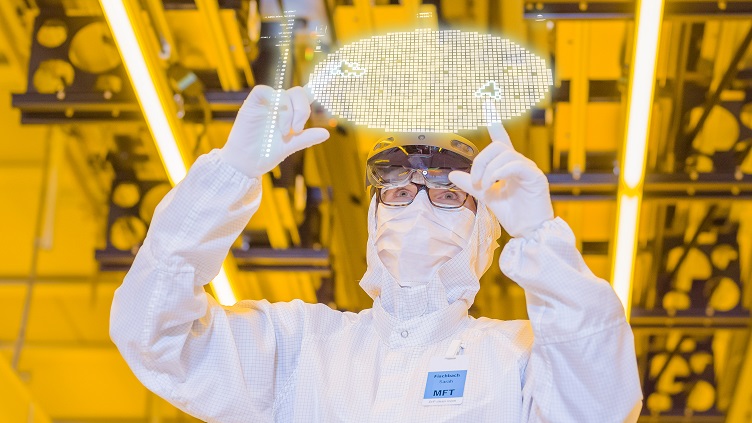 A worker at Bosch’s Dresden fab examines an image of a semiconductor wafer. Canada is working to bring more chipmaking and manufacturing to the country to avoid current and future supply chain issues. Source: Bosch

Canada wants to become a semiconductor powerhouse. And to do so it is laying out short-term, mid-term and long-term goals to be a developer, manufacturer and global supplier of chips.

Canada’s Semiconductor Council has unveiled its roadmap to this goal that would see the country take a slice of the $7 trillion global semiconductor market. Specifically, Canada will seek to develop and manufacture chips for markets such as automotive, healthcare, consumer electronics, smart agriculture and more.

The report, entitled “Roadmap to 2050: Canada’s Semiconductor Action Plan,” highlights the potential Canada has to develop semiconductors to fuel economic growth including the investment of a domestic semiconductor industry.

The move comes as the chip industry is struggling with an ongoing supply shortage causing numerous segments to experience high delays and faltering production. The shortage was caused initially by the COVID-19 pandemic where capacity was moved to accommodate higher demand for compute and consumer electronics due to lockdowns and stay-at-home orders. When demand returned in other sectors, capacity was simply unavailable for other regions to get the semiconductors they needed.

“Our Council formed because we’re in the midst of a global shortage of semiconductors and the time to act is now,” said Sarah Prevette, chair of Canada’s Semiconductor Council and CEO Future Design School. “Canada has homegrown STEM talent, access to critical raw materials and a strong foundation in research, innovation and design.”

The Canadian roadmap includes four main goals that would set up the country for semiconductor development by 2050:

1) Strengthening and diversifying the supply chain. This comes as the chip shortage impacts production and supply. The country will work to secure imported supply of semiconductors and establish a case for increasing domestic production.

2) Develop onshore manufacturing. This would include increasing domestic production of semiconductors by understanding which chips are in high demand, establishing a business model for fabrication, attracting multinational semiconductor manufacturing partners and improving engineering talent.

3) Establish a Canada as a brand. Focusing on design and R&D as well as specializing in electric vehicles, batteries and sensors, areas that are poised for significant growth.

4) Foster market development. This would be crucial to help float the bill for the initial and ongoing capital needed for semiconductor manufacturing.

Canada’s move echoes concerns from other regions regarding having all semiconductor manufacturing concentrated in few locations—namely Taiwan, China and Korea—which could lead to future supply chain fluctuations due to geopolitical conflict or future pandemics.

The Senate recently passed the bill that aims to increase competitiveness in the U.S. by promoting American science and technology leadership. Funding for CHIPS for America Act would include $52 billion in federal investments for new fabs, research and more.

Intel Corp. wants the U.S. to eventually manufacturer one-third of all chips globally. Currently, the U.S. manufactures about 12% and that is on the decline. The European Union has plans with the goal to produce 20% of the world’s semiconductors by 2030. Intel, which announced two new fabs to be built in the U.S., also is looking to build a fab in Europe and potentially might spend $100 billion in new fabs in the region in the next five years.

Korea and Taiwan have goals of their own to maintain control of semiconductor manufacturing with plans to expand fab builds in the next decade.

While the bill will help to increase funding to bring more fabs to the U.S., facilities are already being planned.

Taiwan Semiconductor Manufacturing Co. (TSMC) this month started construction on its new fab site in Arizona. The company plans to spend at least $12 billion on the fab, but reports indicate the company may spend $35 billion, tripling its original investment, to build a gigafab at the Arizona location that would take 10 to 15 years to construct.

Intel is also building two new fabs at its Ocotillo campus in Chandler, Arizona. Intel is investing $20 billion in the fabs as well as an additional $3.5 billion to expand its New Mexico operations for advanced chip packaging technologies.

GlobalFoundries has pledged $1.4 billion to increase output at its three factories in the U.S., Singapore and Germany. The company also recently purchased about 55 acres of undeveloped land adjacent to its Fab 8 facility in Malta, New York.

Samsung Electronics recently announced its location for its new fab in the U.S. that would be in Taylor, Texas, and the company will invest $17 billion in its construction.