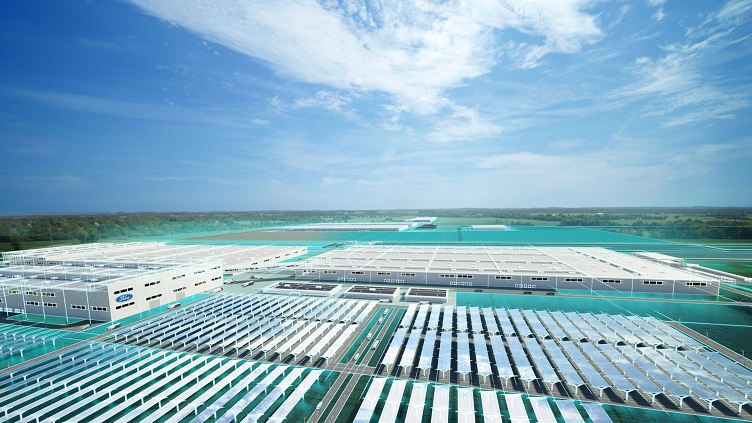 An artist rendering of the BlueOvalSK Battery Park that will produce batteries for Ford’s all-electric vehicles. Source: Ford

The two mega campuses in Tennessee and battery plants in Kentucky will produce next generation electric F-series trucks and the batteries to power future electric Ford and Lincoln vehicles.

In Kentucky, The BLueOvalSK Battery Park will be built through a $5.8 billion investment, creating 5,000 jobs. The twin battery plants on the site will supply Ford North America’s assembly plants with locally assembled batteries for powering next generation EVs.

“This is a transformative moment where Ford will lead America’s transition to electric vehicles and usher in a new era of clean, carbon-neutral manufacturing,” said Bill Ford, executive chair at Ford. “With this investment and a spirit of innovation, we can achieve goals once thought mutually exclusive — protect our planet, build great electric vehicles Americans will love and contribute to our nation’s prosperity.”

Ford has plans to invest at least $22 billion in electrification through 2025 and to transition to electric models as the primary business starting in 2030. Ford said it will only sell EVs in Europe by 2030, completely phasing out its gas-powered vehicles in the region. Previously, Ford opened a battery lab in Ion Park, specifically for all-electric vehicles.

Ford said it is seeing strong demand for its Ford F-150 Lightning truck, E-Transit and Mustang Mach-E EVs. The new factories will deliver a carbon-neutral manufacturing system and will help the company reach carbon neutrality.

Ford said Blue Oval City will be among the largest automotive manufacturing campuses in U.S. history.

The 3,600 acre campus will cover nearly six square miles and encompass vehicle assembly, battery production and a supplier park in a vertically integrated system. The assembly plan will use always-on cloud-connected technologies and will include renewable energy sources such as geothermal, solar and wind power.

“West Tennessee is primed to deliver the workforce and quality of life needed to create the next great American success story with Ford Motor Company and SK Innovation,” said Bill Lee, governor of Tennessee. “This is a watershed moment for Tennesseans as we lead the future of the automotive industry and advanced manufacturing.”

The plant will begin production in 2025. Meanwhile, the BlueOvalSK Battery Park has a targeted opening date of 2025.

The twin co-located 1,500 acre battery manufacturing plants will be capable of producing up to 43 gigawatt hours each for a total 86 gigawatt hours annually.