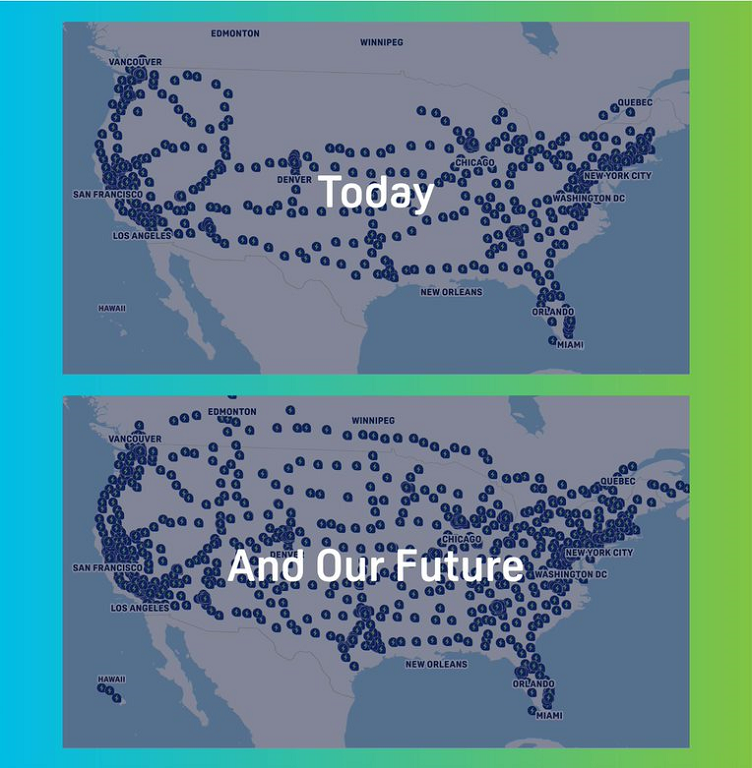 The growing demand for electric vehicles (EVs) and the plans by automotive OEMs to switch to all-electric models primarily by 2030 means that the need for more charging stations will be critical.

Electrify America is looking to help in this regard with a new strategy to double its current EV charging infrastructure in the U.S. and Canada.

This will put more than 1,800 fast charging stations and 10,000 individual chargers across both nations by the end of 2025. The expansion will include both 150 and 350 kilowatt chargers to help with EV expansion in North America.

This new plan expands on Electrify America’s previous commitment to invest $2 billion over the next 10 years in infrastructure, education and access to charging ports in North America.

The company said it is undertaking the expansion because of the rapid growth expected for EVs given the shift in strategy among virtually all automotive OEMs. Additionally, the move will help foster adoption of these vehicles and make them more attractive to drivers.

Automotive OEMs are transitioning to EVs for primary sales as early as 2030. General Motors said it plans to phase out gas and diesel cars by 2035 and Ford is expected to sell mostly EVs by 2030 and will only sell EVs in Europe by 2030. Other OEMs have followed suit including Volkswagen, Volvo, Daimler and Jaguar.

A recent study by the University of California, San Diego found that in order for the transition to EVs to happen, more fast-charging stations are needed to compete with the simplicity and efficiency of gas stations.

As part of the new investment, Electrify America will not only multiply its presence in established regions, but will also add its charging infrastructure in the states of Hawaii, North Dakota, South Dakota, West Virginia, Wyoming and Vermont, bringing the network to 49 states and the District of Columbia.

The new expansion will also include a new charging highway in the upper Midwest, providing necessary EV infrastructure for electric mobility in the region as well as expanding offerings in the California Central and San Joaquin Valleys.

In Canada, the company will boost its commitment of 32 stations to more than 100 charging locations and 500 chargers in the next five years. This will expand the network to areas in Saskatchewan, Manitoba, New Brunswick, Nova Scotia and Prince Edward Island.