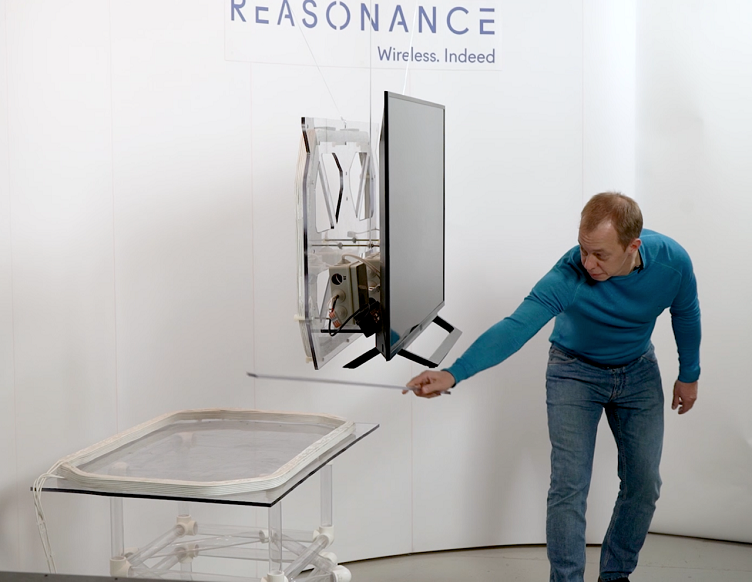 Cutting the cord has become a trend in recent years with consumers ditching standard cable phones for smartphones, desktop PCs for laptops and watching entertainment content on tablets instead of televisions. Cord cutters will be happy to know that Reasonance, an R&D startup, has presented a fully wireless 40 in TV prototype powered with 120 W through the air at CES 2021

The prototype features a receiving coil on the back panel, but the company said it could be incorporated inside the actual TV as well. The transmitting system is placed horizontally with an angle of 90° at 50 cm, eliminating misalignment between two coils.

Being truly wireless allows consumers to move a wireless TV closer to a bed or sofa without disrupting power. The technology is based on magnetic resonance but with a patented configuration of the transfer system for high performance in power, efficiency, transfer distance and design freedom, Reasonance said.

"There were few attempts to create wirelessly working home devices, like TVs. Samsung was going to show a truly wireless TV at CES 2020 but they have canceled their plans,” said Anton Vishnevsky, founder and CEO of Reasonance. “As they later clarified, the power efficiency achieved by the tech at this stage would not be enough to offer a stable source of power to the TV. With our technology the 'truly wireless TV' becomes a reality."

The company is working on other wireless prototypes on a wide range of consumer applications that could make cordless a reality in the coming years.