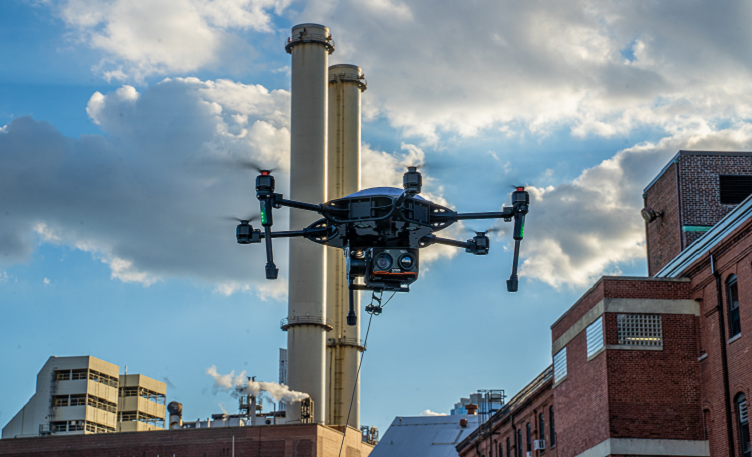 The drone hexacopter can carry an 8.5 lb payload capacity with three hardpoints, two on the side that can carry up to 4 lb and the bottom hardpoint that can carry payloads of up to 8 lb. The side payload stations feature standard mounting as well as Picatinny rails that support a wide range of applications such as floodlights, communications relays, loudspeakers and cyber-related and other commercial and military electronic systems. The bottom hardpoint is designed for gimbaled cameras or large ISR loads such as radar or communication jammers.

Because of these features, the system works in applications such as commercial, public safety, firefighting, military, border patrol, perimeter, and infrastructure overwatch and surveillance operations.

The Albatross drone features multiple redundancies with a backup system that flies even in the event of a motor failure. Because data and power are delivered via a tethered system, unlimited flight time is available for transmitting HD video and telemetry through the connected power line. Easy Aerial said this avoids the need for radio transmission and is more secure than wireless transmissions.

The tether is attached to a military-grade ground station that is designed for rapid transport and can be set up by a two-person team. The ground system can be deployed from a stationary area or on mobile launch sites such as a standard pickup truck that can travel up to 25 miles per hour.

“The synergy between 3D printing and composite materials has set the tone for our latest drone design. The intricate shapes of the printed parts are the ultimate solution to the geometric challenges while the composite materials secure a light and strong structure,” said Omri Dayan, chief drone designer for Easy Aerial. “The flat bottom plate and Picatinny rails were designed to allow the simplest integration of any payload with the user experience as the top priority.”