100 years of the theremin

Electronic music did not start in the 1960s, when popular music groups started incorporating the Moog synthesizer, along with older instruments like the theremin, into their compositions. The theremin, the first electronic instrument to be mass-produced, came to life decades earlier in 1919, the brainchild of eclectic Russian inventor Leon Theremin (born Lev Termen).

Although the instrument never gained the sort of popularity the inventor and his supporters had hoped for, the theremin still boasts a community of devoted composers, performers and listeners. This year Theremin World is honoring the 100th anniversary of the instrument’s introduction and multiple orchestras are programming theremin compositions and soloists. Despite its niche status among musical instruments, it nonetheless has devotees that have helped it evolve over the last century and expand its use beyond movie sound effects.

Most accounts of the theremin’s invention state that Leon Theremin had set out to develop a land-based sonar system when he discovered what became the theremin. However, Theremin’s biographer Albert Glinsky wrote that the inventor’s intent had been to add an audible signal to a meter that indicated the density of gases. In the process, he discovered that putting his hand into the electric field around the gas meter produced sounds of different pitches. At first he used a foot pedal to control sound but decided that using both hands to “play” the electrical fields was a more interesting road to take — a musical instrument that is 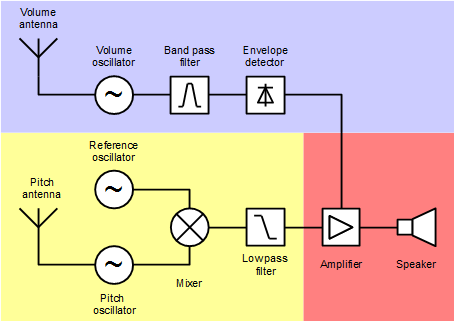 The theremin operates on the principles of heterodyning and capacitance. The theremin’s circuits generate an electromagnetic field that emanates from two antennas: a vertical pitch antenna on top of the instrument’s cabinet and a horizontal volume antenna on the side. Pitch is determined by two pitch circuits — oscillators — one variable and one fixed, set in the RF range. When a player inserts his or her hand into the pitch antenna field, the hand becomes the plate of a variable capacitor. This shifts the variable oscillator’s frequency, which in turn cancels out like frequencies of the two oscillators. The remaining sound waves form the pitch of the sound the audience hears. Volume is also controlled by hand movements near the horizontal antenna. The schematic diagram shows the basic circuitry of a theremin.

The inventor toured the world — sponsored by Vladimir Lenin — demonstrating his new gadget, eventually making his way to the U.S. in 1928. Both mainstream composers, like Percy Grainger, and avant-garde composers, like Joseph Schillinger, composed for the theremin. Theremin played his instrument in Schillinger’s First Airphonic Suite in New York in 1929, exciting public interest and encouraging RCA to buy rights to manufacture the Thereminovox. RCA intended to sell a theremin for every living room in the U.S.

To say that RCA failed miserably is to understate the truth: only about 500 instruments were manufactured. The $232 cost, particularly in a country slipping into the depths of the Great Depression, no doubt affected adoption (the equivalent price in 2019 dollars is about $3,500). However, RCA’s theremin design is still used today using modern circuitry.

Over time the original hands-free design accumulated more advanced controls. Robert Moog, a theremin builder and aficionado before he invented his eponymous synthesizer, added controls that allow the player to adjust volume and pitch as well as sound qualities like brightness. A small instrument, the Theremini, is MIDI-enabled. Electronic music cognoscenti may not realize how much Moog’s love of the theremin sparked his interest in expanding the range of electronic instruments. 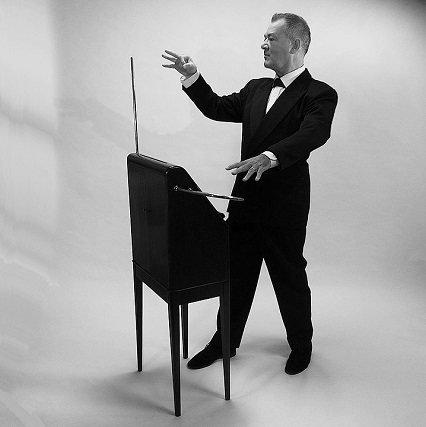 Bruce Woolley playing an RCA theremin. Source: Soundsweep/CC BY-SA 4.0, Other enthusiasts have contributed newer designs, which in turn are altered and refined by hobbyists. Mark Keppinger uses vacuum tubes instead of electrical coils as in the original design. PAiA, a producer of kit products for musicians and electronics enthusiasts, offers the Theremax theremin. The manufacturer said that this instrument produces both the original instrument’s “mellow sine-like tone” and allows the player to produce square-wave signals. The Theremin World website provides access to multiple schematic diagrams. Single-board computers like Raspberry Pi also provide instructions for building an instrument.

The theremin is alive and well

Theremin virtuoso Dorit Chrysler established the KidCoolThereminSchool in New York City. Part of the rationale for combining kids and theremins is the need to use multiple senses to play the instrument well. A player must be aware of body position and movement, as well as sound and elements of music like pitch, tone and volume. The unanticipated success of this initial effort has led to multiple workshops and appearances around the world.

In honor of this major milestone, multiple concerts featuring theremin soloists are slated around the world, including the Albany Symphony Orchestra on November 9 and the BBC Philharmonic in Manchester on November 16.