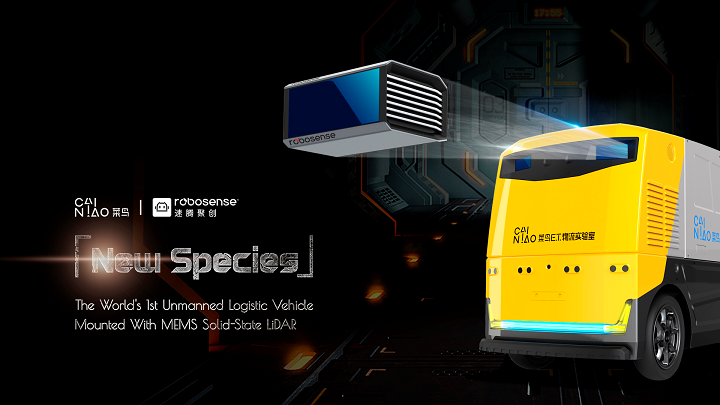 RoboSense has reached a strategic partnership with Alibaba to provide delivery vehicles with solid-state LiDARs for all G Plus unmanned logistics cars, drastically reducing the cost of the driverless vehicles. The vehicles can be mass-produced, allowing the rapid expansion of unmanned logistics vehicles and streamlining mass-market delivery logistics, for the rapid popularization of the vehicles. The unmanned cars and trucks can also be equipped with different smart devices according to demand, turning the vehicle into a courier vehicle, a mobile self-pickup station, a mobile coffee vending cart, etc., which can be applied to various new retail scenarios.

3D Perception of the Driving Environment

The Alibaba’s Cainiao G Plus unmanned delivery vehicle is equipped with three RS-LiDAR-M1Pres, two in the front and one in the rear, to ensure the most powerful 3D perception of the driving environment. This allows unmanned delivery vehicles to clearly see the direction of travel, including the shape, distance, azimuth, travel speed and direction of travel of pedestrians, cars, trucks and other obstacles, as well as the exact areas on which roads can be driven, etc., to ensure the smooth flow of unmanned logistics vehicles in a complex road environment.

RoboSense LiDAR Costs as Low as a Few Hundred Dollars

The RS-LiDAR-M1Pre is the first MEMS solid-state LiDAR launched by RoboSense. The world’s first solid-state LiDAR equipped in an unmanned vehicle, the technology was first publicly presented and demonstrated at CES 2018 in Las Vegas. The core technology of the MEMS solid-state LiDAR is disruptive to traditional mechanical multi-beam radars. The MEMS micromirror scanning scheme used in the RS-LiDAR-M1Pre requires only a few laser emitters and receivers to scan through the MEMS micro-mirror in both directions because of the swing angle. The resolution is a very fine, high-angle and vertical-angle resolution that reaches 0.2 degrees throughout the angle of view.

For traditional mechanical multi-beam LiDAR to achieve the same effect, they require more than a hundred laser transmitters and receivers to rotate and scan at the same time, which greatly increases material and labor costs and reduces yield and reliability, making the advantages of MEMS solid-state LiDAR technology obvious. While improving the performance of LiDAR, the cost savings is also great, and at the same time the miniaturization of the scanning structure greatly improves the stability of LiDAR.

“We want to build a three-dimensional distribution network. After a package enters the network, artificial intelligence will automatically distribute routes and unmanned vehicles will relay deliveries,” said Zhang Chunhui, director of the Cainiao Network E.T. Logistics Laboratory. “We plan to have 100,000 unmanned vehicles in the next three years.”