Moving Toward a 'Brain on a Chip' 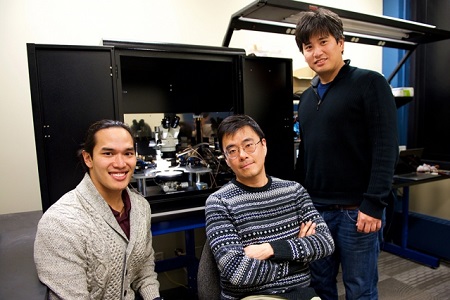 Forget binary calculations that rely on ones and zeroes. The goal of neuromorphic computing, an emerging field that attempts to mimic the working of a biological brain, is to exchange a gradient of signals, or “weights,” in the same way as neurons work inside our heads: what gets activated depends on the type and number of ions flowing across synapses. Researchers envision a low-power “brain on a chip” to serve as portable artificial intelligence, efficiently processing millions of streams of parallel computations — something that is currently only possible with large banks of supercomputers.

But there’s a catch: reproducing the synapses themselves — the structures that permit neurons to pass signals to one another — has posed a significant hardware challenge. Most neuromorphic chip designs attempt to emulate the synaptic connection using two conductive layers separated by a “switching medium” made of amorphous solid materials. When a voltage is applied, the ions should move in the medium to create conductive filaments. Because these mediums are filled with defects, however, they offer unlimited possible paths through which ions can travel. This makes the flow of ions difficult to control, creating an unwanted nonuniformity in synapse performance.

As published in the journal Nature Materials, engineers at MIT have gone a different route. By using single-crystalline silicon, a defect-free conducting material made from atoms in a continuously-ordered alignment, they are able to create a precise, one-dimension line defect to precisely control the ions’ path — and, thus, the strength of an electric current flowing across the synapse. They have built their synapses, each measuring about 25 nanometers across, into a small silicon germanium chip. Applied voltage flows with about a four percent variation between synapses, much more uniform than that offered by amorphous material.

The team also tested its device on a pattern-recognition task: recognizing samples of handwriting, something that researchers consider to be a first practical test for neuromorphic chips. In a simulation, they found that the chip and its synapses were able to recognize samples of handwriting, with 95 percent accuracy. The researchers are now turning their attention to fabricating a working neuromorphic chip that can carry out handwriting-recognition tasks not in simulation, but in reality.

“Ultimately we want a chip as big as a fingernail to replace one big supercomputer,” says research leader Professor Jeehwan Kim, a principal investigator in MIT’s Research Laboratory of Electronics (RLE) and Microsystems Technology Laboratories (MTL). “This opens a stepping stone to produce real artificial hardware.”