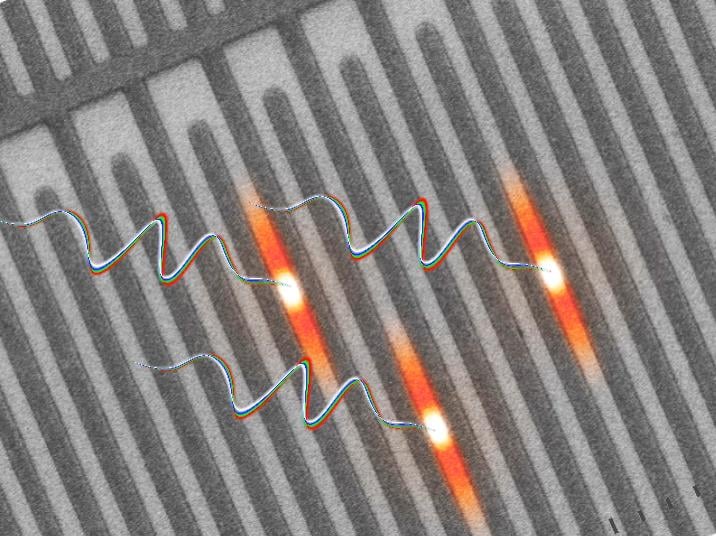 The image depicts three photons passing through a superconducting nanowire, causing the nanowire to heat up and disrupting the super-current. Source: Duke University

Engineers have shown that a widely used method to detect single photons can count the presence of at least four photons at a time. This discovery will unlock new capabilities in physics labs that are working in quantum information science around the world. The discovery will also provide easier paths to developing quantum-based technologies.

Researchers from Duke University, the Ohio State University and Quantum Opus, the industry partner, collaborated on this study.

"Experts in the field were trying to do this more than a decade ago, but their back-of-the-envelope calculations concluded it would be impossible," said Daniel Gauthier, a professor of physics at Ohio State who was formerly the chair of physics at Duke. "They went on to do different things and never revisited it. They had it locked in their mind that it wasn't possible and that it wasn't worth spending time on."

"When we presented our data, world experts were just blown away," continued Jungsang Kim, professor of electrical and computer engineering at Duke. "It's neat having a group like ours that got started a bit later decide to try something because we didn't have any blinders on."

At the heart of the detector is a superconducting filament. A superconductor is a special material that can carry an electric current forever, with no losses, even at low temperatures. However, like a normal piece of copper wire, a superconductor can only carry so much electricity at one time.

The SNSPD works by charging a looped segment of superconducting wire with an electric current close to its maximum limit. When a photon passes, it causes the maximum limit in a small part of the wire to drop. This creates a brief loss of superconductivity. The loss then causes an electrical signal to mark the presence of the photon.

In the new system, the researchers focused on the specific shape of the initial spike in the electrical signal and show that they can get enough detail to correctly count four photons traveling together in a packet.

"Photon number resolution is very useful for a lot of quantum information/communication and quantum optics experiments, but it's not an easy task," said Clinton Cahall, an electrical engineering doctoral student at Duke and first author of the paper. "None of the commercial options are based on superconductors, which provide the best performance. And while other laboratories have built superconducting detectors with this ability, they're rare and lack the ease of our setup as well as its sensitivity in important areas such as counting speed or timing resolution."

In order for other labs to use this new discovery, they would just need a specific type of amplifier for boosting the SNSPD’s tiny electrical signal. The amplifier must work at the same low temperatures at the SNSPD ( -452 degrees F) in order to reduce background noise. It must have a wide bandwidth in order to avoid distorting the signal. These amplifiers are already commercially available and many labs already have them.

The results allow researchers around the world that are working in quantum mechanics to immediately gain new abilities with their existing equipment. For example, the Duke-Ohio State group recently reported how using the timing of incoming photons, in addition to their quantum states, could greatly increase the speed of quantum encryption techniques.

The team is currently working on optimizing their setup to see just how far they can stretch the abilities. They believe that, with the right electronics and a little bit of practice, they would count 10-20 photons at a time. The group has filed for a patent to create off-the-shelf devices based on this method.

A paper on this research was published in Optica.