Recent advances in quantum computers could soon give hackers access to machines powerful enough to crack even the toughest standard of security codes. With these broken codes, online data—from medical records to bank transactions—could be vulnerable to hackers and attack. 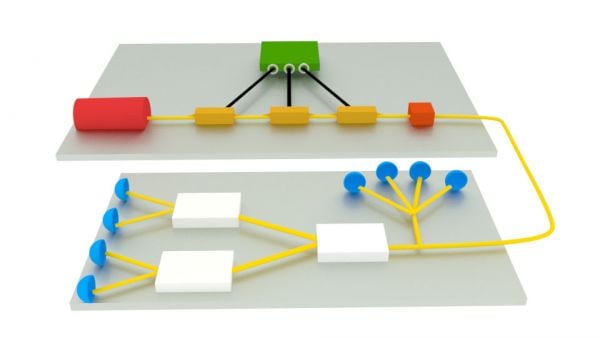 To fight back against this future threat, researchers are wielding the same strange properties that drive quantum computers to create theoretically hack-proof forms of quantum data encryption.

Now, these quantum encryption techniques may be one step closer to wide-scale use thanks to a new system developed by scientists at Duke University, The Ohio State University and Oak Ridge National Laboratory. This system can create and distribute encryption codes at megabit-per-second rates, which is five to ten times faster than existing methods and in part with current internet speeds when running several systems in parallel.

The researchers demonstrate that the technique is secure from common attacks, even with the equipment flaws that could open up leaks.

"We are now likely to have a functioning quantum computer that might be able to start breaking the existing cryptographic codes in the near future," said Daniel Gauthier, a professor of physics at The Ohio State University. "We really need to be thinking hard now about different techniques that we could use for trying to secure the internet."

Online purchases, bank transactions and medical records look like gibberish to a hacker because of ciphers called encryption keys. Personal information sent over the web is scrambled using the keys and then unscrambled by the receiver using the same key.

For this system to work, both parties have to have access to the same key, and it must be a secret. Quantum key distribution (QKD) takes advantage of one of the fundamental properties of quantum mechanics to exchange keys in a way that immediately alerts both parties to the existence of a security breach.

Though QKD was first theorized in 1984 and implemented shortly after. The technologies to support its wide-scale use are only now coming online. Companies in Europe sell laser-based systems for QKD and in a highly publicized event in summer 2016, China used a satellite to send a quantum key to two land-based stations located 1200 km apart.

The problem with these systems is that they can only transmit keys at relatively low rates—between tens to hundreds of kilobits per second—which are too slow for most practical uses on the internet.

"At these rates, quantum-secure encryption systems cannot support some basic daily tasks, such as hosting an encrypted telephone call or video streaming," Nurul Tamir Islam, a graduate student in physics at Duke, said.

Like many QKD systems, Islam’s key transmitter uses a weakened laser to encode information on individual photons of light. But they found a way to pack more information onto each photon, which makes the technique faster.

By adjusting the moment where the photon is released, and a property of the photon called the phase, their system can encode two bits of information per photon instead of one. This, paired with high-speed detectors developed by Clinton Cahall, a graduate student in electrical and computer engineering, and Junsange Kim, professor of electrical and computer engineering, at Duke, powers their system transmit keys five to ten times faster than other methods.

"It was changing these additional properties of the photon that allowed us to almost double the secure key rate that we were able to obtain if we hadn't done that," said Gauthier, who began the work as a professor of physics at Duke before moving to OSU.

In a perfect world, QKD would work perfectly and be incredibly secure. Any attempt to hack a key exchange would leave errors on the transmission that could be easily spotted by the receiver. But real-world implementations of QKD require imperfect equipment and these imperfections open up leaks that hackers can exploit.

The researchers characterized the limitations of each piece of equipment they used. They worked with Charles Lim, currently a professor of electrical and computer engineering at the National University of Singapore to incorporate these experimental flaws into the theory.

"We wanted to identify every experimental flaw in the system, and include these flaws in the theory so that we could ensure our system is secure and there is no potential side-channel attack," Islam said.

Though the transmitter requires some specialty parts, all of the components are currently available commercially. Encryption keys encoded in photons of light can be sent over existing optical fiber lines that burrow under cities. This makes it relatively straightforward to integrate their transmitter and receiver into the current internet infrastructure.

"All of this equipment, apart from the single-photon detectors, exists in the telecommunications industry, and with some engineering, we could probably fit the entire transmitter and receiver in a box as big as a computer CPU," Islam said.

A paper on this research was published in Science Advances.