Graphene has been labeled the “material of the future” in the electronics and high-tech industries. Graphene is a good conductor with fast charge transfer times, which makes it ideal for some electronic, photovoltaic, and memory applications. However, with a zero band gap, this material is not well-suited for fabricating transistors or other devices for applications that require fast switching capabilities.

Graphene’s supremacy may be in jeopardy. A group of international researchers, led by Feng Wang from Berkeley Lab’s Material Sciences Division, has reported the development of a group of 2D semiconductors (known as MX2) with an extremely fast charge transfer time of under 50 femtoseconds. This is indeed fast—one femtosecond is one millionth of one billionth of a second, or 10-15 second.

"We've demonstrated, for the first time, efficient charge transfer in MX2 heterostructures through combined photoluminescence mapping and transient absorption measurements. Having quantitatively determined charge transfer time to be less than 50 femtoseconds, our study suggests that MX2 heterostructures, with their remarkable electrical and optical properties and the rapid development of large-area synthesis, hold great promise for future photonic and optoelectronic applications." said Wang. 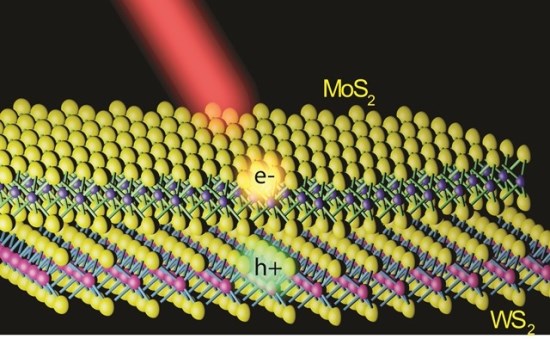 MoS2/WS2 heterostructure with an MoS2 monolayer on top of an MS2 monolayer. Electrons and holes created by light are shown to separate into different layers. (Credit: Feng Wang group)

MX2 semiconductors are manufactured by placing a single layer of transition metal atoms, such as molybdenum (Mo) or tungsten (W), between two layers of chalcogen atoms, such as sulfur(S). These 2D semiconductors exhibit the same hexagonal structure as graphene and possess extremely fast electrical conductance.

“Combining different MX2 layers together allows one to control their physical properties," said Wang. "For example, the combination of MoS2 and WS2 forms a type-II semiconductor that enables fast charge separation. The separation of photo-excited electrons and holes are essential for driving an electrical current in a photodetector or solar cell."

With ultra-fast charge separation, these semiconductors are perfectly suitable for photovoltaic applications. The research results were published on August 24, 2014 in the online journal Nature Nanotechnology.

The Photon Cannon: Creation of a Photon Stream

For some time now, the technical community has been working to produce photonic circuits. These are circuits based on the flow of photons of light instead of electrons. The main challenge is the creation of a continuous stream of single photons, which would allow control of photon direction. In electronic circuits, electrons (fermions) flow individually; photons (bosons) on the other hand tend to clump in groups when formed. In order to use photons as the basic unit of quantum communication, fabricators need to produce single photons and send them in a particular direction one at a time. This operation has eluded the scientific community.

Researchers at the Niels Bohr Institute at the University of Copenhagen in Denmark report a breakthrough: a stream of single photons was produced by a quantum dot.

"So you need to emit the photons from a fermionic system and we do this by creating an extremely strong interaction between light and matter," explained Peter Lodahl, professor and head of the research group Quantum Photonics. 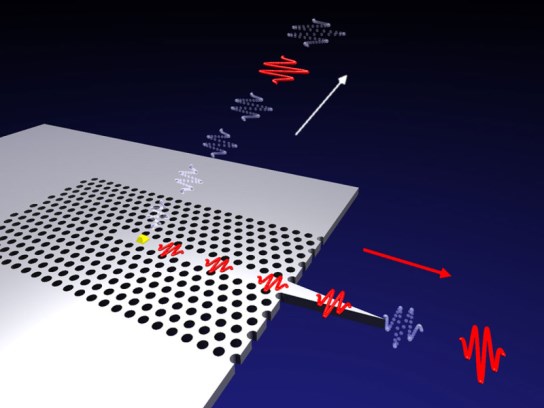 They developed a single-photon cannon integrated on an optical chip that exists on a very small (ten microns wide and 160 nanometers thick) photonic crystal. Inside the chip there is a light source made of a quantum dot, as illustrated in the figure.

"What we then do is shine laser light on the quantum dot, where there are atoms with electrons in orbit around the nucleus. The laser light excites the electrons, which then jump from one orbit to another and thereby emit one photon at a time. Normally, light is scattered in all directions, but we have designed the photonic chip so that all of the photons are sent through only one channel," explained Søren Stobbe, an associate professor at the Niels Bohr Institute.

Not only were they able to produce the single-photon stream, but they also designed the chip to efficiently control photon direction.

"We can control the photons and send them in the direction we want with a 98.4 percent success rate. This is ultimate control over the interaction between matter and light and has amazing potential. Such a single-photon cannon has long been sought after in the research field and opens up fascinating new opportunities for fundamental experiments and new technologies," Strobbe and Lodahl explained.

An article published by the Physical Review Letters details the research.