Engineers have succeeded in building tiny, insect-like robots, but programming them to behave autonomously like a real insect has been an ever-present challenge. Cornell University engineers have been experimenting with a new type of programming that mimics the way an insect’s brain works, and their research has been successful. 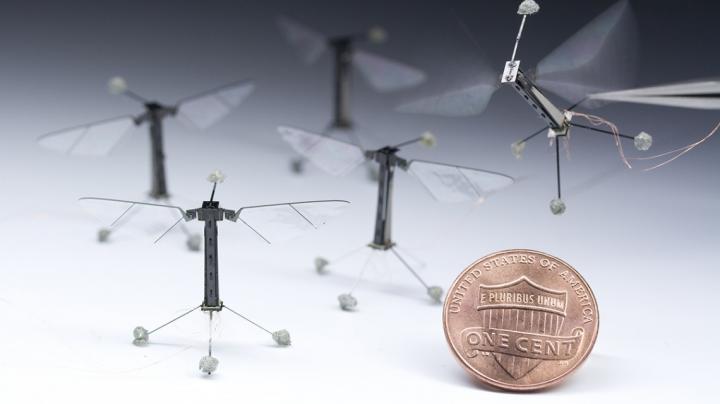 To sense things like a gust of wind, adjust flight, plan a flight path or land on a swaying flower, the robot would theoretically need a desktop-sized computer on its back. Silvia Ferrari, professor of mechanical and aerospace engineering and director of the Laboratory for Intelligent Systems and Controls, believes that the emergence of neuromorphic computer chips is a way to shrink the robot’s payload.

Unlike traditional chips, which process combinations of 0's and 1's as binary code, neuromorphic chips process spikes of electrical current that fire in complex combinations, similar to how neurons fire inside a brain. Ferrari’s lab is developing a new class of "event-based" sensing and control algorithms which mimic neural activity and can be implemented on neuromorphic chips. These chips require significantly less power than traditional processors so they allow engineers to pack more computation into the same payload.

Ferrari’s lab has teamed up with the Harvard Macrobiotics Laboratory, which has developed an 80-milligram flying RobotBee outfitted with many vision, optical flow and motion sensors. The robot currently remains tethered to a power source, but Harvard researchers are working on eliminating the restraint with the development of new power sources. The Cornell algorithms are intended to give RoboBee more autonomy and adaptability in complex environments without significantly increasing its weight.

"Getting hit by a wind gust or a swinging door would cause these small robots to lose control. We're developing sensors and algorithms to allow RoboBee to avoid the crash, or if crashing, survive and still fly," said Ferrari. "You can't really rely on prior modeling of the robot to do this, so we want to develop learning controllers that can adapt to any situation."

In order to speed development of the event-based algorithms, Taylor Clawson, a doctoral student in Ferarri's lab, created a virtual simulator. The physics-based simulator models the RoboBee and the instantaneous aerodynamic forces that it faces during each wing stroke. As a result, the model can predict RoboBee’s motions during flights through complex environments.

"The simulation is used both in testing the algorithms and in designing them," said Clawson, who has successfully developed an autonomous flight controller for the robot using biologically inspired programming that functions as a neural network. "This network is capable of learning in real time to account for irregularities in the robot introduced during manufacturing, which make the robot significantly more challenging to control."

Other than greater autonomy and resiliency, the lab plans to fit RoboBee with new microdevices, like a camera, expanded antennae for tactile feedback, contact sensors on the robot’s fee and airflow sensors that look like tiny hairs.

"We're using RoboBee as a benchmark robot because it's so challenging, but we think other robots that are already untethered would greatly benefit from this development because they have the same issues in terms of power," said Ferrari.

There is a robot already benefiting from this research. The Harvard Ambulatory Microrobot is a four-legged machine that measures just 17 millimeters long and weighs less than three grams. Thanks to this research, the robot can scamper at a speed of .44 meters-per-second, but Ferrari’s lab is developing event-based algorithms that can help complement its speed with agility.