Tethered flying insect robots have been around for some time, but the electronics drive them are too heavy to be embedded. The University of Washington announced the creation of new flying insect; the researchers cut the cord and gave a brain to the robot insect. 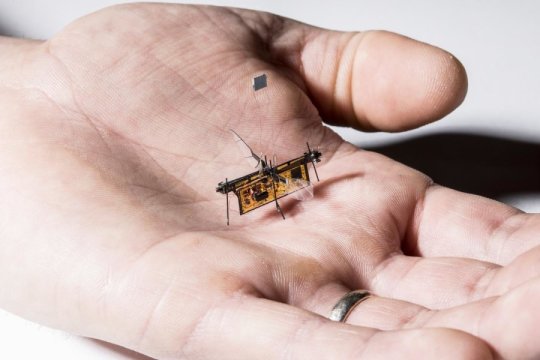 Instead of using propellers like a standard drone, RoboFly – as was christened by the researchers – moves by fluttering tiny wings like real insects. To operate its wings RoboFly uses a tiny onboard circuit that converts laser energy, from a laser beam, into electrical energy.

"Before now, the concept of wireless insect-sized flying robots was science fiction. Would we ever be able to make them work without needing a wire?" said co-author Sawyer Fuller, an assistant professor in the UW Department of Mechanical Engineering. "Our new wireless RoboFly shows they're much closer to real life."

Previously, Fuller designed a flying robot insect, the RoboBee, but the device was tethered to a power source through a wire. A true insect, however, must fly on its own, so the researchers decided to use a narrow invisible laser beam to drive the robot. The beam is pointed to a photovoltaic cell mounted on top of RoboFly that makes the conversion to electric power.

"It was the most efficient way to quickly transmit a lot of power to RoboFly without adding much weight," said co-author Shyam Gollakota, an associate professor in the UW's Paul G. Allen School of Computer Science and Engineering.

The output voltage of the photocell alone is not enough to flap the wings. Wing flapping requires lots of power. For the case of RoboFly, the process needed at least 240 V to maintain the fly. This is the reason the researchers added an amplifier circuit to boost the photovoltaic output to 240 V. In addition, they added a microcontroller so RoboFly can control the direction, height, and speed of its wings.

"The microcontroller acts like a real fly's brain telling wing muscles when to fire," said co-author Vikram Iyer, a doctoral student in the UW Department of Electrical Engineering. "On RoboFly, it tells the wings things like 'flap hard now' or 'don't flap.'"

The microcontroller drives the insect by sending voltage waves to the mechanical wings.

"It uses pulses to shape the wave," said Johannes James, the lead author, and a mechanical engineering doctoral student. "To make the wings flap forward swiftly, it sends a series of pulses in rapid succession and then slows the pulsing down as you get near the top of the wave. And then it does this in reverse to make the wings flap smoothly in the other direction."

Today, RoboFly can only take off and land. Once the laser beam is out of contact the robot runs out of power. The researchers are already planning a future version using tiny batteries mounted on the robot that can harvest energy from radio frequency signals.

These types of robots could be used to perform difficult tasks such as surveying crop growth on large farms or to become mechanical bees to pollinate flowers or to sniff out gas leaks.

"I'd really like to make one that finds methane leaks," he said. "You could buy a suitcase full of them, open it up, and they would fly around your building looking for plumes of gas coming out of leaky pipes. If these robots can make it easy to find leaks, they will be much more likely to be patched up, which will reduce greenhouse emissions. This is inspired by real flies, which are really good at flying around looking for smelly things. So we think this is a good application for our RoboFly."

A more detailed account of the research can be found here.