Scientists from ITMO University have suggested a new solar cell coating that combines features of an electrode and those of a light-trapping structure. The coating enabled researchers to cut down on reflected light and avoid solar cell overheating. This would increase efficiency by 20 percent. The suggested method may be attractive for industrial applications because it is relatively inexpensive and simple. 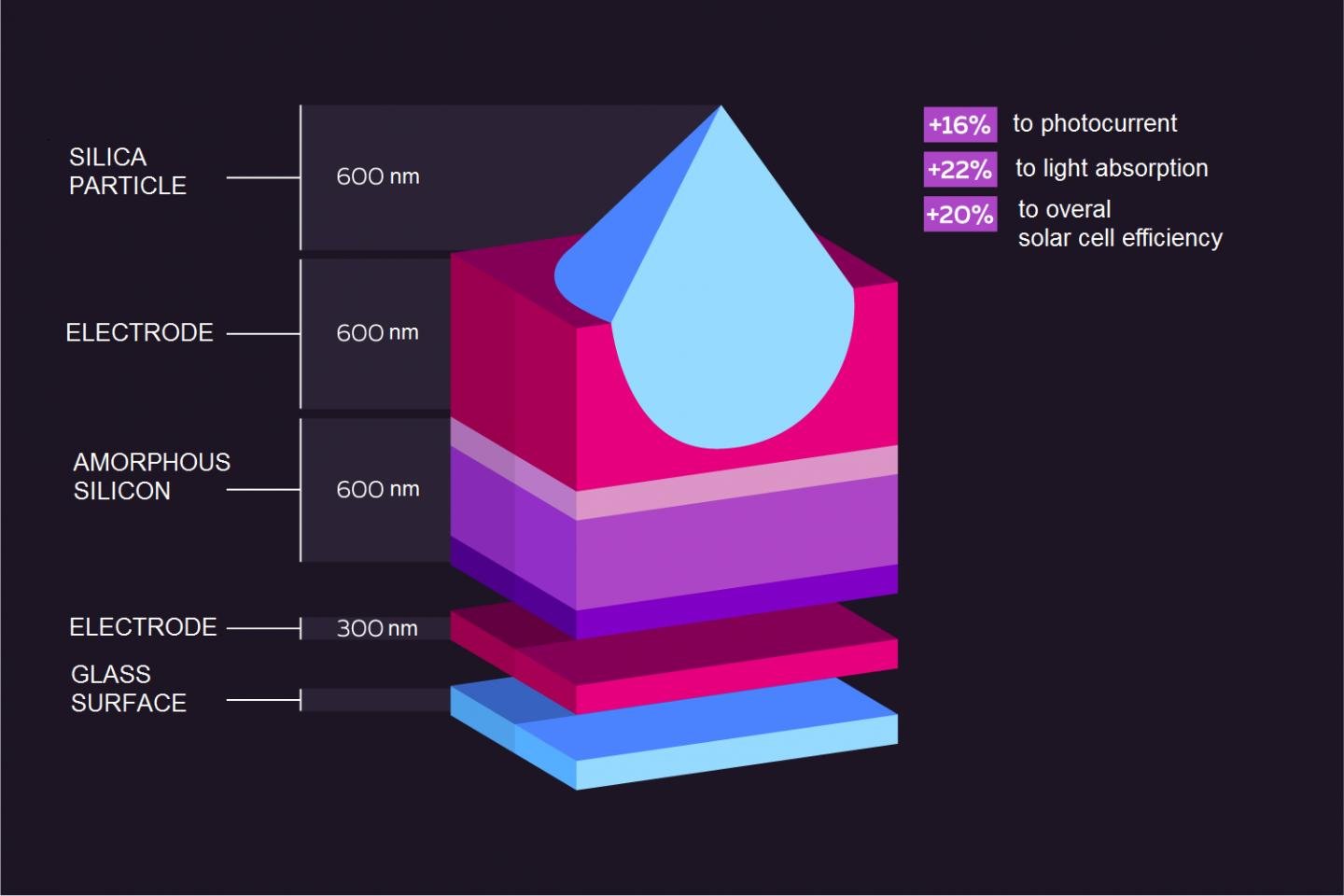 Layers of the new coating and advances in their functions. Source: ITMO University

There is a large range of materials that can be used for solar cell production. For example, solar cells based on amorphous silicon are basically thin transparent films that may be applied to any surface, including a window pane. When it comes to manufacturing solar cells, it is crucial to find ways to diminish light reflection from cells and avoid transparent electrode overheating, which prevents solar cells from working properly. Another issue is to optimize the thickness of an active layer so each photon reaching the solar cells is turned into electricity.

The ITMO University scientists created a way to address these issues by putting silica particles inside the top electrode; these are later transferred into a drop-like shape. The resulting structure functioned as an electrode as well as a light-trapping coat, focusing the light on the solar cell.

"To create such structures on the surface of a solar cell we use the method of atomic layer deposition of aluminia zinc oxide. We literally build these electrodes atom by atom," explains Mikhail Omelyanovich, lead author of the paper. "As a result, overall solar cell efficiency is improved by 20 percent. What is more, such an electrode can be used for thin solar cells composed of any material beyond amorphous silicon."

It took the team several years to develop an affordable solar cell manufacturing method that would appeal to the industry.

"Three years ago we tried to cover cell surface with microspheres. Despite improving light absorption significantly, they had a major drawback in high reflectance rate. We considered removing the upper part of microspheres, so as to make something similar to a lens that would focus the light on the solar cell. However, while working over the practical realization of this idea we found much better structure. On the whole, the final solution exceeded our expectations based on theoretical calculations," says Omelyanovich.

According to the team, the manufacturing of solar cells with these surface coatings doesn’t require complex technology and the process may be easily adapted for mass production.

The paper on this research was published in Optics Letters.