Solar energy has been a promising source of renewable energy for years. But there are still some issues with it. For years researchers have been trying to develop a simple method to create solar cells that also uses cheap materials. A simple process and low price tag are two major factors that would make solar cells an even more favorable power source. 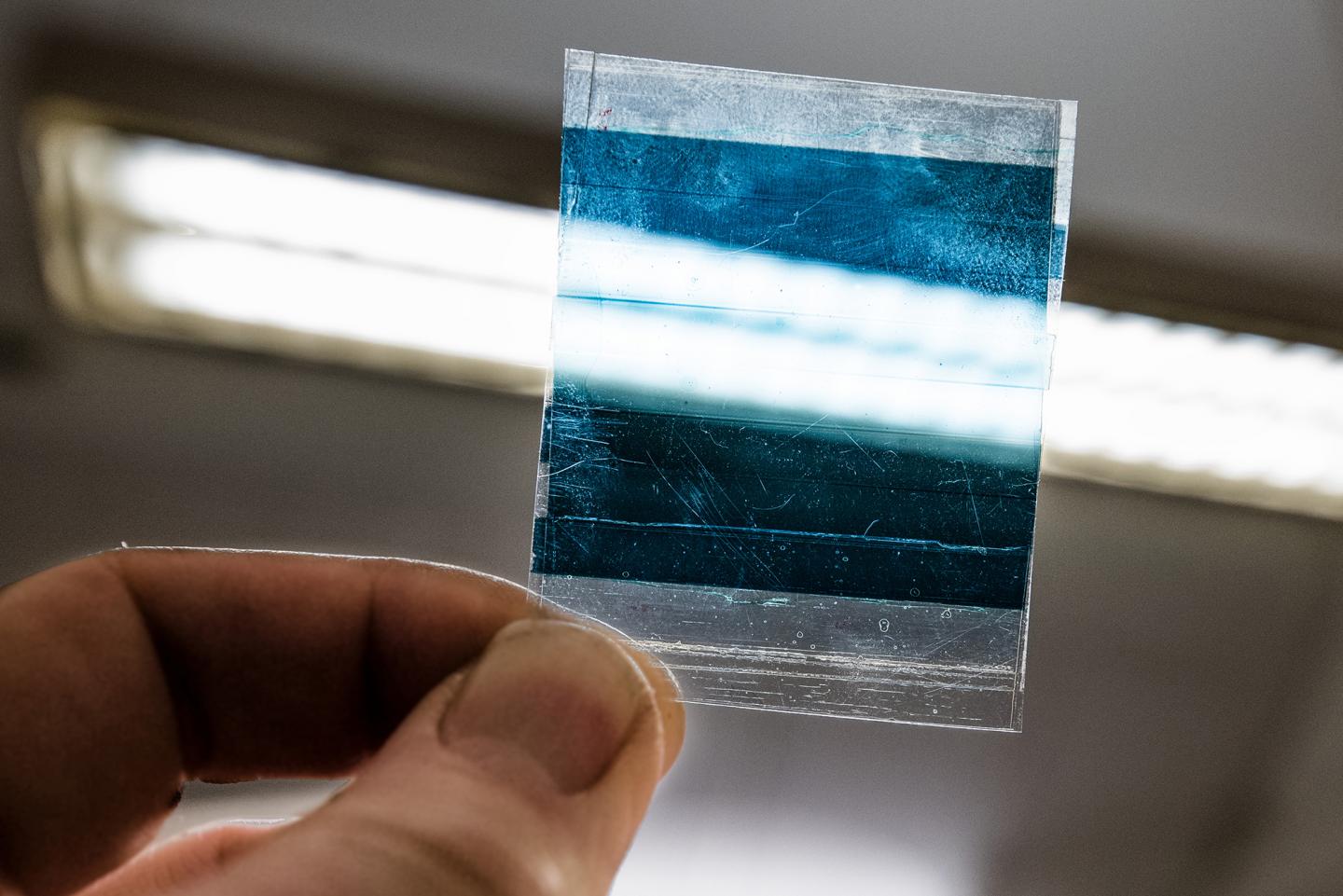 In a semi-transparent solar cell module as shown in the photograph, electrodes with two variants of the polymer PEDOT:PSS (commonly used in organic electronics) are used, where one acts as the anode and the other is modified to become the cathode. What appear as stripes across the solar cell module are lines of either cathode-type or anode-type material. The active layer that absorbs light and produces electrons is located between these electrodes. The individual solar cells are connected in series in the module. Source: Thor Balkhed

Researchers from Linköping University have developed an even simpler method with cheap materials for the manufacturing process of solar cell modules. Organic solar cells are quickly becoming just as powerful as silicon solar cells. But organic solar cells have not been utilized as much as conventional solar cells.

"The organic solar cells can be used in many contexts, not least those in which their special properties are useful: they can be semitransparent, soft, flexible, can be obtained in different colors, and they are cheap to manufacture," says Olle Inganäs, professor of biomolecular and organic electronics at Linköping University.

Through their study, the research group focused on significantly improving the manufacturing process of organic solar cells.

In the newly developed organic solar cells, there are electrodes that have two variants of PEDOT:PSS polymers that are usually used in organic solar cells. One of these variants is the anode and the other variant is modified in the lab to become a cathode. There is an active layer in these solar cells that acts as the light absorbing material. This layer that produces the electrons is between the variant electrodes.

One major problem with organic solar cells is the weakness in defects. When the electrode layer and active layer are printed on top of each other, any defect in the first layer will be a point of attack when the next layer is printed. This causes the defects to reinforce each other, which results in short-circuits. Developers have solved this problem in the past by passing a current through the cell defect.

"The defects in each individual cell must be burned away. Not only is this time-consuming, it's not easy to gain access to all cells, and this means that the reject rate for faulty units is quite high," Olle Inganäs explains.

Researchers attacked this problem by using a method that takes advantage of the active polymer as glue. They covered the two plastic films with an active material before they are laminated together. The number of defects is lower in this method because only two layers are printed. It is almost impossible that the defects will be located opposite of each other during the lamination process.

"It just doesn't happen. But we did discover that when we laminate the two layers together to give a flexible and robust module, the solar cells generate more current when illuminated from one side than from the other. Of course, we want the cell to generate the same current no matter whether the sun is rising or setting," said Inganäs.

The team found that moisture is another problem. There are small electron traps that are formed in the solar cell that capture the electrons before they make their way to the electrode. Manufacturing the anode and cathode films and laminating them together with the active polymer can fix this issue. The key is no exposing the cell to moisture if possible.

"We have shown that this lamination method works with many different combinations of polymer and that the energy efficiency is just as high as that obtained by conventional manufacture," says Olle Inganäs.

The paper on this new method for developing organic solar cells was published in Flexible Electronics.