Beyond Bitcoin: Breaking Down the Differences in Blockchain Cryptocurrencies

For some, bitcoin’s origin story seems stranger than fiction. Bitcoin and the blockchain technology that drives it were derived by a mysterious entity called Satoshi Nakamoto, a person or group of people that released the open-source bitcoin software in early 2009. Since that time, bitcoin has grown from a curious proto-cryptocurrency to a well-accepted tender with almost 10 million transactions per month as of 2017.

(For an overview of the basics of bitcoin and blockchain currencies, read Bitcoin – The App that Made Blockchain Famous on Electronics360.) 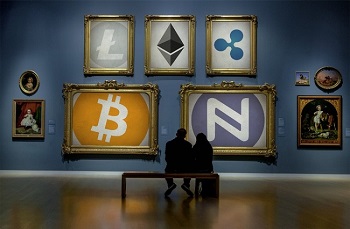 A gallery of cryptocurrency symbols. Clockwise from top left: Litecoin, Ethereum, Ripple, Namecoin and bitcoin.The wider acceptance of bitcoin and cryptocurrency means that other emerging competitors to the original technology are gaining traction in the marketplace. Some of these are bitcoin-based and merely tweak the original code’s features, while others are completely different protocols. The cryptocurrencies discussed below are some of bitcoin’s top derivatives and competitors.

Litecoin was introduced in late 2011 and is nearly identical to bitcoin. However, Litecoin has two major advantages: almost zero payment cost and faster payment processing. Litecoin’s proof-of-work algorithm speeds processing time by using scrypt in place of bitcoin’s SHA-256 hash function. This change allows Litecoin to process a block every 2.5 minutes, rather than bitcoin’s 10 minutes. Using scrypt comes with a price, however: it requires more complex processing and more memory space, so the field-programmable gate array (FPGA) and application-specific integrated circuit (ASIC) devices produced to mine Litecoin are typically more complicated and expensive.

Ethereum: Way More Than a Currency

Much more than a cryptocurrency, Ethereum was introduced in 2015 as a decentralized, Turing-complete virtual machine featuring smart contract functionality. In other words, it is a decentralized software platform that runs on a blockchain, with its own artificially intelligent programming language.

Ethereum uses its own cryptocurrency, called Ether, which serves two main purposes. First, it can be exchanged like any other cryptocurrency. Second, Ether is also used within Ethereum to run custom-built applications and monetize work on the platform.

Compared to bitcoin, Ethereum has a few similarities and many differences. The most obvious similarity is that both are blockchain-based, but from there they diverge as far as technical detail and purpose. Ethereum is essentially a platform that enables peer-to-peer contracts and applications, and uses its cryptocurrency as tender to do so. Ether was never intended to supplant physical money, like bitcoin, but rather it “powers” Ethereum. 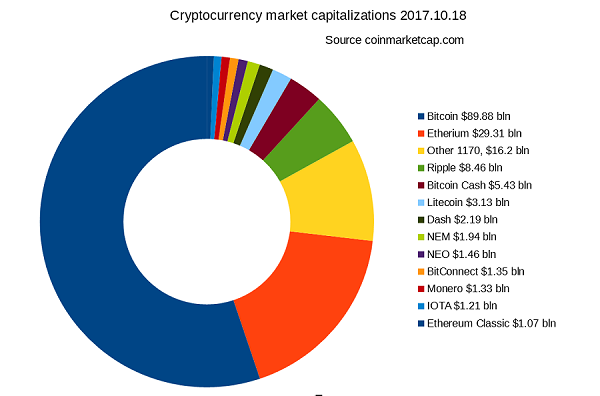 Cryptocurrency market capitalization as of mid-October 2017. Ethereum is second to frontrunner bitcoin.

Technically, Ethereum’s programming is completely different from bitcoin’s stack-based architecture. It also uses ethash for proof-of-work algorithms instead of bitcoin’s SHA-256. Ethereum transactions take place in a matter of seconds, unlike the several minutes needed for bitcoin block processing.

Considering these differences, Ethereum cannot be considered a true competitor to bitcoin: their purposes and functions are completely different.

Zcash: Private, For Better or Worse

If Litecoin is considered a faster sibling of bitcoin, Zcash could be its reclusive, private cousin. Zcash grew out of the Zerocoin project, which was aimed at improving anonymity for bitcoin users. Zcash is published on a public blockchain, like bitcoin, but Zcash users have the option of selecting optional privacy features that conceal the payment’s sender, recipient and amount.

Zcash users also have the option of “selective disclosure,” which they can use to prove their private payments occurred to comply with anti-money-laundering regulations or for tax purposes.

Zcash’s privacy features are attractive to users, but they may prove to be an impediment to its wider adoption. An advantage of bitcoin’s public ledger is that investigators can use it to track down illicit activity like that related to the drug trade. But Zcash’s lack of transparency makes it difficult when attempting to interface with other financial institutions. According to some critics, it also provides a simple platform for untraceable, criminal transactions, making it appealing to scammers.

Dash — formerly known as Darkcoin and Xcoin — was introduced in early 2014 as a more user-friendly version of bitcoin. It features a basic bitcoin feature set with a number of enhancements. First, Dash enables both instant transactions and private transactions, known as InstantSend and PrivateSend, respectively. It accomplishes this by expanding bitcoin’s one-tier network to two tiers. The first tier is modeled after bitcoin, with miners creating and processing blocks. The second tier performs PrivateSend, InstantSend and governance functions separately.

Dash uses an interesting decentralized, peer-to-peer funding and governance system. The system allows Dash to pay individuals or businesses that perform work that benefits the network. A “treasury system” is used to collectively make decisions on and fund proposed network changes. Ten percent of the network’s block rewards are funneled into the treasury system, and these funds may pay for anything from hiring additional developers, attending conferences and integrations with major financial institutions, depending on a voting system. As Dash’s currency value has increased, the value of the treasury has also increased; in early 2017 Dash claimed to have a monthly budget of nearly $575,000.

Compared to most of the other currencies discussed here, Ripple stands out like a sore thumb. This is because Ripple isn’t really a cryptocurrency: it’s a real-time gross settlement system (RTGS) with its own native cryptocurrency, called a ripple (abbreviated XRP). Some banks and other larger financial institutions have adopted Ripple as their settlement infrastructure, and many have found it to be less expensive and more secure than bitcoin.

Ripple acts more like a bank than most blockchain technologies. It requires two parties to execute a transaction. The first is a regulated financial institution that holds funds and issues balances to its customers. The second party is a group known as “market makers,” which is often hedge funds or currency traders that provide liquidity in whatever currency the customer is looking to trade in. Ripple facilitates real-time international money transfer, making it a significant competitor to bitcoin for large financial institutions. Also, bitcoin users are able to accept bitcoin payments directly from a Ripple user via a “bitcoin bridge.”

Monero was introduced in 2014 and, like Zcash, one of its main objectives is improved privacy. It uses a fairly novel application layer protocol called CryptoNote, an almost completely anonymous blockchain. Individuals or organizations cannot retrace CryptoNote blocks through the chain to reveal the identity of a payment’s sender or receiver. To that end, Monero also uses ring signatures to mix a spender’s address with others, making it nearly impossible to link transactions. Monero’s architecture is also resistant to ASIC mining, which is common in bitcoin. It can, however, be mined with some efficiency on consumer-grade CPUs such as x86.

While this privacy allows users some peace of mind, it also appears to make Monero vulnerable to hacking. The cryptocurrency has experienced a few hacks, including a major breach to CryptoNote in 2014, but Monero has since deployed patches and algorithms to strengthen its own security. Still, Monero’s feasibility for CPU mining may leave it open to attack from covert miners embedded in malware.

If the information here proves anything, it’s that — for both investors and consumers — know the ins and outs of your cryptocurrency investment before taking the plunge.