Understanding the Differences Between Consumer and Industrial Batteries

Consumer products such as phones, cameras, computers and watches mainly operate on consumer-grade alkaline, primary lithium, and lithium-ion (Li-ion) rechargeable batteries. While inexpensive and readily available, these batteries are often not well adapted to the fast-growing industrial internet of things (IIoT).

In early 2017, the Gartner research firm found that as many as 20.4 billion connected devices would be utilized worldwide by 2020, including a large number of remote wireless devices connected to the IIoT.

Industrial grade applications demand more rugged and reliable batteries that can survive long-term deployments in highly-challenging industrial environments, often in places where battery access is difficult or impossible. By comparison, consumer batteries are intended to operate in moderate environments and accessible locations where they can be easily replaced or recharged.

Sometimes, it may not be obvious which type of battery is better. One-size-fits-all solutions rarely make sense when specifying batteries, so it is important to understand the fundamental differences between consumer and industrial batteries to determine the ideal power source.

This rundown of battery attributes will help to clarify those differences.

Familiar consumer batteries, such as alkaline and lithium-ion, are mass produced to be inexpensive. Alkaline batteries are ideal for use in devices that require a constant flow of current, including radios, flashlights, and remote controllers. Consumer Li-ion batteries are commonly used to power rechargeable consumer devices such as cell phones and laptops. Consumer alkaline and Li-ion batteries do not tolerate heat or cold well, and their lifetimes can be measured in months or years, not decades.

Industrial batteries are designed to last much longer and are deployed in extreme environments and remote locations that are difficult to access for battery replacement. Examples include industrial grade lithium primary batteries used to monitor structural stress on bridges, underwater seismic measurements, or scientific instruments in arctic climates.

Sometimes, the decision to use an industrial grade battery can be influenced by the sheer number of devices, automated metering reading (AMR) applications for water and gas utilities where the batteries may be relatively easy to access but having to systematically change-out tens of thousands of batteries each year would prove prohibitively expensive and could potentially overwhelm field service personnel.

This example demonstrates that while the initial cost of an industrial battery is typically higher than a consumer cell, the long-term value derived may justify its use, as the total cost of a battery not only includes its purchase, but also the effort needed to replace it, including actual labor and travel time as well as the cost of the replacement battery. Be careful not to specify a consumer battery when an industrial battery is necessary.

Primary: The most common form of primary (non-rechargeable) consumer battery is the alkaline cell, which consists of zinc powder in a suspension as the anode and compressed manganese dioxide as the cathode. Commonly used in flashlights, TV remotes, and smoke detectors, consumer alkaline cells are relatively short-lived not intended to perform like an industrial battery.

Primary industrial batteries tend to use more energetic lithium chemistries and higher quality materials, enabling them to outperform consumer grade cells. Since industrial batteries are made to last decades and operate in more extreme environments, quality control is paramount, as battery failure can be totally unacceptable for certain highly remote applications. 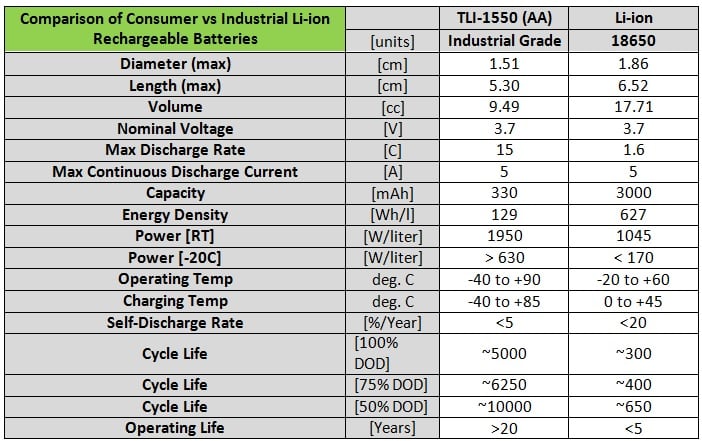 Bobbin-type Lithium-thionyl chloride (LiSOCl2) design: Lithium-thionyl chloride batteries are preferred for use in the majority of remote wireless applications due to their high energy density and high capacity, which aids in product miniaturization and extended battery life. The bobbin-type Li-SOCI2 design reduces the annual self-discharge rate to the lowest rate of all commercially-available cells (<1% per year for certain cells), enabling certain cells to operate for up to 40 years. However, bobbin-type LiSOCI2 batteries are not designed to deliver the high pulses required for two-way wireless communications without modification. To address this need, Tadiran developed a patented hybrid layer capacitor (HLC) that works like a rechargeable battery to store and deliver periodic high pulses while the standard bobbin-type LiSOCl2 cell delivers daily background current. The HLC can be incorporated into the battery or supplied as a separate unit.

Spirally-wound LiSOCI2 design: LiSOCI2 batteries can also be manufactured with a spirally-wound design that can provide greater continuous current for higher drain devices. However, the trade-off is a much higher annual self-discharge rate than bobbin-type construction. 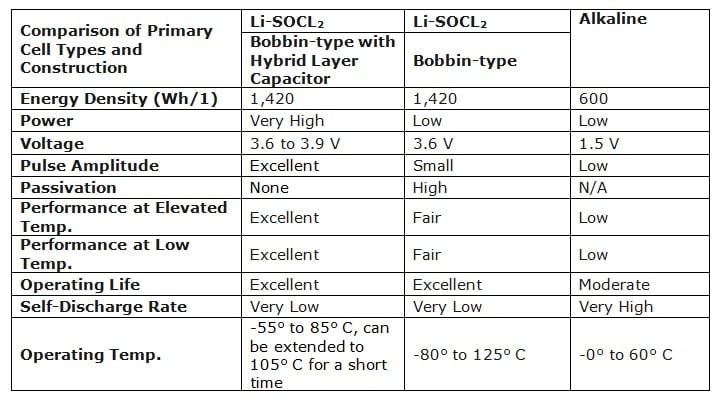 Wirelss devices that draw low daily average current can achieve extended life by operating mainly in a ‘stand-by’ mode that requires little or no daily background current. The device is then programmed to awaken on a preset schedule or only if certain data thresholds are exceeded, then quickly cycles through data interrogation and transmission before returning to its ‘stand-by’ mode. This operational pattern is adaptable to applications that require periodic high pulses of energy.

There are numerous factors that should be considered during the battery specification process, including:

Ultimately, design and quality make the difference. When a battery is intended to last for decades, choosing the highest quality battery available can reduce the total cost of ownership over the lifetime of the device.

Tadiran, a leader in industrial batteries, has learned from over 35 years of experience how to combine the highest quality and purest materials with proprietary manufacturing processes and strict quality control procedures to create a superior quality bobbin-type LiSOCl2 battery that features an annual self-discharge rate as low as 0.7% per year, thus retaining over 70% of its original capacity after 40 years. By contrast, a lesser quality bobbin-type LiSOCl2 cell can have a annual discharge rate of 3% per year, losing up to 30% of its available capacity every 10 years, thus making 40-year battery life impossible.

Differences between batteries often do not become apparent for years, so thorough due diligence is required to verify the claims of battery manufacturers. Do not rely on theoretical battery performance, as accelerated long-term testing and actual in-field performance will provide far more verifiable results.

Specifying the right battery for a wireless device starts with understanding the fundamental differences between consumer and industrial batteries, then performing the proper due diligence to ensure that the battery you select performs as expected and serves to reduce your total cost of ownership.