Many modern-day electronic designs rely on battery power, with the expectation of years of operation without service or battery swap. Such applications include remote sensors, automated meter reading, wireless security devices, mobile asset tracking, emergency location beacons, IoT and many others.

With a battery-operated design that is expected to work for many years, the choice of battery is one of the most important design decisions. For these applications, a service call to replace the battery is unacceptable. The design could be powered using some sort of energy harvesting in combination with a lithium-ion (Li-ion) rechargeable battery, but that solution is rife with possible problems. The surest and simplest way to go, assuming low or infrequent power draw, is a primary battery.

Many consumer devices use a 1.5 V alkaline primary battery. These batteries are inexpensive, but carry both a three- to five-year lifetime due to self-discharge as well as a low specific energy (energy per unit mass) of about 200 Wh/kg, meaning the battery will take up a lot of space. Lithium thionyl chloride (Li-SOCl2) primary batteries offer the highest energy density (over 500 Wh/kg), plus the longest operating life available due to an extremely low self-discharge rate. Self-discharge occurs when internal chemical reactions continually reduce the stored charge of the battery. Self-discharge decreases the operating life of batteries and reduces available energy. Li-SOCl2 batteries have a relatively high 3.6 V nominal operating voltage, which eases design constraints. The batteries can last up to 40 years without any maintenance and will typically function in temperatures from -55° C to 85° C (and some types, up to 130° C).

When choosing a Li-SOCl2 primary battery, the design engineer must be certain that it will truly last for the time required. Battery manufacturers often provide theoretical data that can be highly misleading in terms of predicting actual long-term battery performance. The engineer cannot expect performance to be the same just because a battery uses the same basic chemistry. How is it possible to be certain a design will meet its requirements? Testing an actual battery for 20 or 40 years would leave no doubt, but this is an unrealistic method for evaluating the latest technologies.

Being certain about battery lifetime 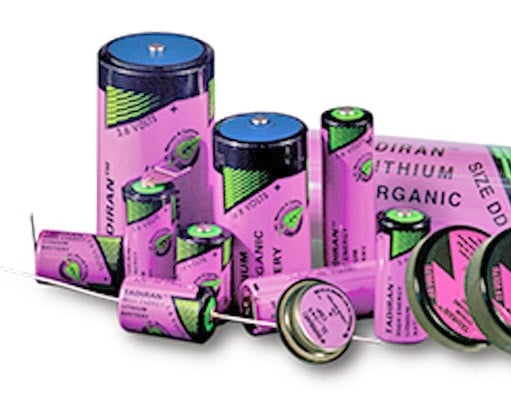 It is practically impossible to apply industry-standard accelerated aging test methods to Li-SOCl2 batteries to predict future performance. The quality of the materials used, the cell design, the manufacturing process and the testing performed on the manufacturing line are the only ways to ensure a 40-year lifetime.

Tadiran has made low self-discharge Li-SOCl2 batteries since the mid-1980s and has an in-depth knowledge of the raw materials involved. The company has accumulated test data from decades of production and this is automatically compared during production lot tests. They draw upon a huge library of historical test points, including open circuit voltage, voltage under load, self-discharge rate, low voltage point at load and temperature. Tadiran’s lab has batteries that are still under operating test after 30-plus years. These units are under different loads and different test profiles. Because of this, Tadiran believes they have the upper hand in ascertaining quality and lifetime. This test data has been validated by field results Aclara (formerly Hexagram), a leading manufacturer of AMR/AMI utility meters, who began replacing meter transmitters units (MTUs) installed in the mid-1980s with newer generation devices. Aclara and Tadiran tested the older devices and found that they still had plenty of available battery capacity after 25+ years in the field.

In the lab, batteries are tested for long-term operation at 72° C. It is important to understand how to properly run and interpret results to avoid a false positive result. Some cells are laboratory tested at this temperature for one month at the one-month discharge rate (using the cells up). Others are tested at two-, three-, four-, five-, six-month and one-year discharge rates. The data from this ongoing testing provides invaluable quality information. The company also does field checks of random customer batteries in long-term use.

Some other Li-SOCl2 devices have an annual self-discharge rate of up to 3%. After 30 years, these batteries will retain just 10% of their original capacity. The designer must check specifications carefully. 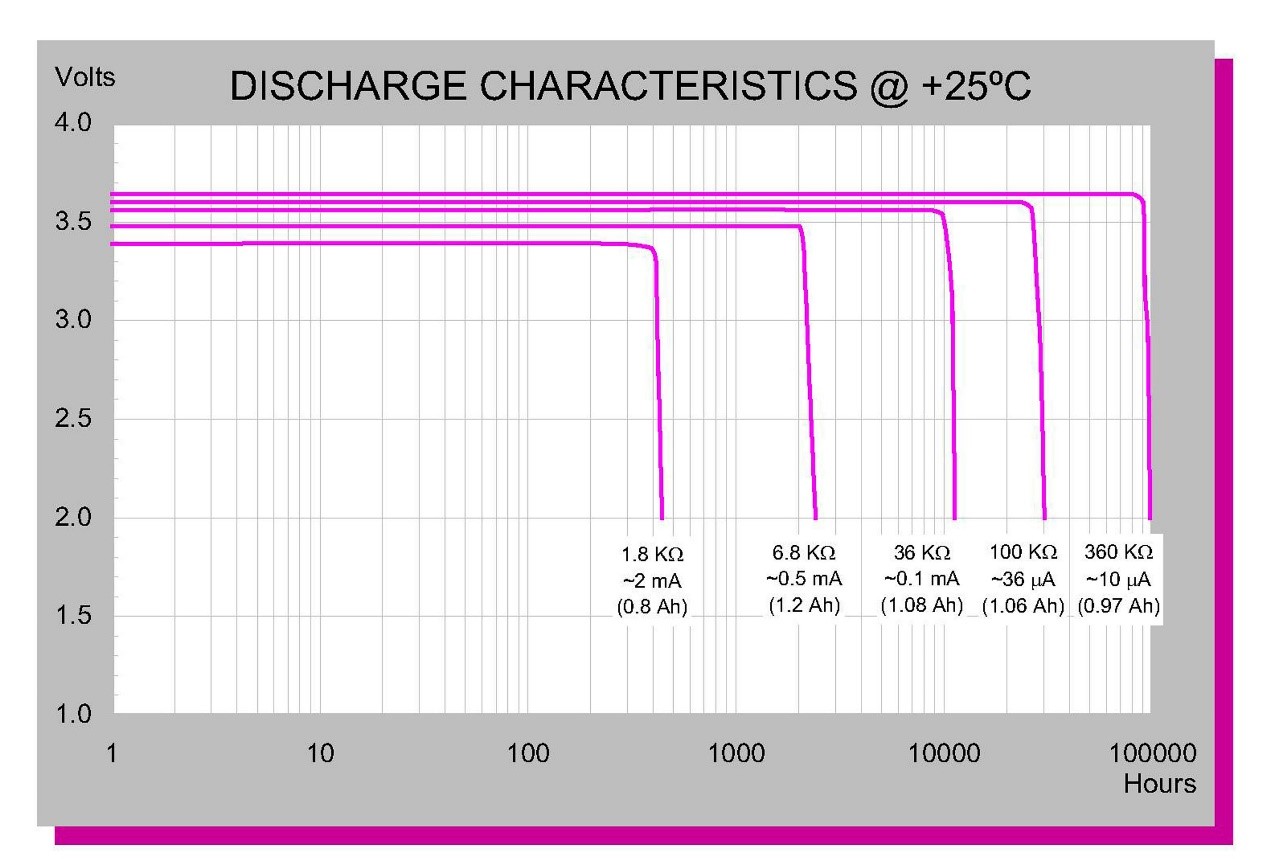 The battery’s high resistance is observable in voltage versus temperature and load curves (Figure 3). 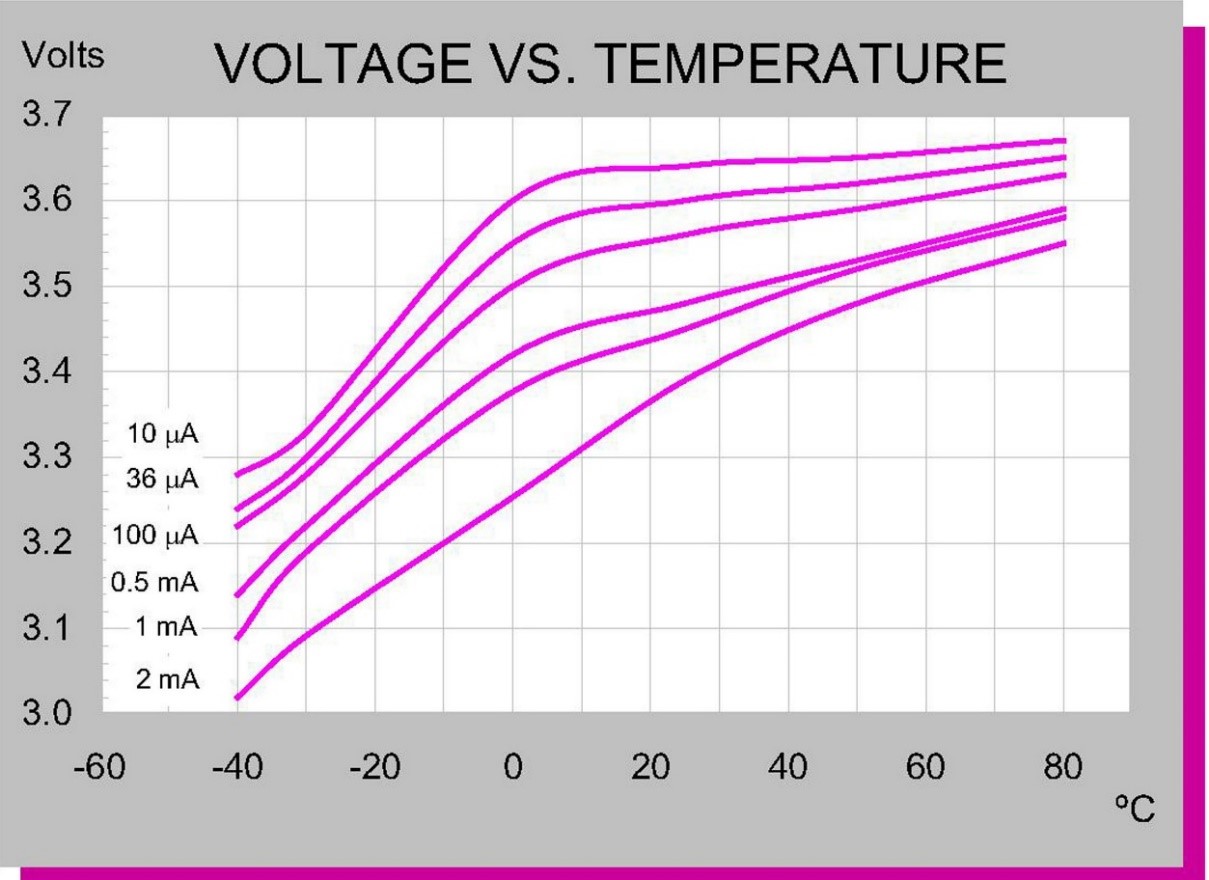 The long shelf life of lithium batteries is mainly due to a thin protective layer of lithium chloride (LiCl) that forms on the anode. This layer prevents further reaction and loss of capacity in storage. It may also cause a relatively high resistance to occur for a short time after prolonged storage or extended storage at elevated temperatures. This causes delay in the voltage build-up if high load is applied.

At high current, there may be a transition period during which the initial voltage drops below the plateau voltage before recovering. During this period, voltage may stay above the application cut-off voltage, which is typically about 2.5 V. If the current is large enough, voltage may drop below cut-off for a short time. The time before it recovers to the application cutoff is referred to as the delay time and the lowest value of voltage reached is called the transient minimum voltage (TMV). If the TMV is below the circuit under-voltage cutoff setting, a delay circuit may be needed.

Tadiran offers the PulsesPlus battery, which removes TMV problems altogether by adding a patented hybrid layer capacitor (HLC). The capacitor holds the voltage for the short period of cell recovery.

Unlike a standard bobbin-type Li-SOCl2 battery, a PulsesPlus cell is designed deliver periodic high pulses to power two-way wireless communications (15 A pulse, 5 A continuous). In addition, the PulsesPlus battery features a very low self-discharge rate of less than 1% per year, and is available in standard sizes ranging from ½AA to DD cylindrical cells, as well as multi-cell battery packs.

Intrinsic safety is another attribute of Li-SOCl2 batteries. In the bobbin version, the cathode is cylindrical in shape and the anode is swaged against the inner wall of the battery case. This offers several safety advantages. In the event of an unintentional short circuit, the discharge currents are not strong. The heat generated, primarily at the contact surface between the anode and cathode, can easily be channeled to the outside. This design leads to a safe battery that needs no additional rupture vent.

Bobbin-type Li-SOCl2 batteries are a reliable workhorse for many industrial wireless applications. As with most leading technologies, it is critical to understand the performance parameters of various battery chemistries.

Since theoretical performance data can be highly misleading, it is incumbent on design engineers to diligently evaluate battery manufacturers by combining comprehensive long-term lab test results, actual performance data from devices in the field and customer testimonials.

Contact an engineer at Tadiran for advice on how to optimize a battery driven application.