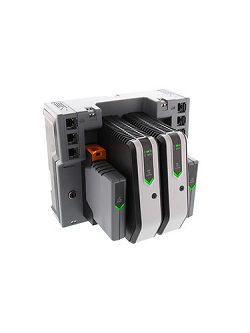 (Source: Emerson)Emerson (St. Louis, Mo.) has launched the DeltaV™ PK Controller, making the advanced automation of its DeltaV™ distributed control system (DCS) available to fast-growth industries traditionally less reliant on large-scale automation. The next-gen controller provides scalable automation control to all process industries, particularly parts of the life sciences, oil and gas, petrochemical, and discrete manufacturing industries that have relied on complex, non-integrated programmable logic controllers (PLCs) with limited operational capabilities. The fit-for-purpose DeltaV PK Controller is the process industry’s first controller that manufacturers can scale down for skid units or scale up to be natively merged into the DeltaV DCS in a larger plant.

These industries tend to use PLCs for smaller applications, which can create disconnected “Islands of Automation,” and limits plant production improvements. The DeltaV PK Controller is the first controller to truly bridge small and large control applications. Organizations can leverage the DeltaV PK Controller for effective, easy-to-implement standalone automation control akin to a PLC but with the features of a full-scale DCS, including advanced batch production, recipe management, execution, and historization. Users can then choose to leave the DeltaV PK Controller standalone, or natively merge it into their DeltaV DCS. This capability eliminates operational complexity and dramatically improves the performance, safety, and efficiency of their entire project and operational lifecycle.

The new controller will simplify capital projects by enabling OEM skid-builders to design and produce skids in the same way they do today, while eliminating the costs, time, and risks associated with integrating a PLC into their control system.

The DeltaV PK Controller was designed from the start with connectivity, particularly into the Industrial Internet of Things (IIoT), in mind. The scalable controller leverages an assortment of communication protocols, including the first Emerson controller with a built-in OPC UA server. It is also the first Emerson controller with six Ethernet ports and can operate using any Emerson DeltaV I/O type, including DeltaV Electronic Marshalling, traditional marshalled I/O, wireless I/O, and integrated safety instrumented systems. In addition, it has built-in protocols to communicate with Ethernet devices such as drives and motors. Together, these features make connectivity easier at every stage and help plants achieve operational benefits of cloud-based tools and analytics through the IIoT. The DeltaV PK Controller also features built-in redundancy for controllers, communication, and power supplies, allowing organizations to improve uptime without adding to complexity or footprint.