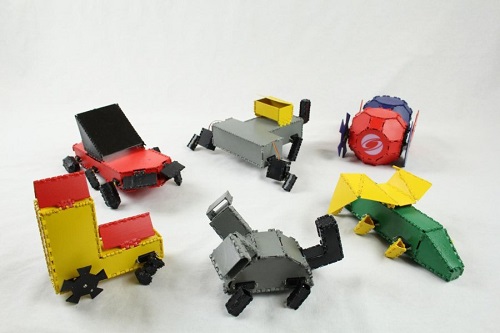 The 3D-printed robot can use single legs to walk, use different step sequences and use legs and wheels simultaneously. Source: MIT CSAIL

Developing robots seems like an incredibly difficult task with months of development, fabrication and testing where one wrong move may prove disastrous.

Now, MIT’s Computer Science and Artificial Intelligence Laboratory (CSAIL) has developed a new system, called Interactive Robogami, that lets users design a robot in minutes and then 3D-print and assemble it in under four hours.

“Designing robots usually requires expertise that only mechanical engineers and roboticists have,” says PhD student Adriana Schulz. “What’s exciting here is that we’ve created a tool that allows a casual user to design their own robot by giving them this expert knowledge.”

Interactive Robogami uses simulations and interactive feedback with algorithms for design composition, allowing users to focus on high-level design. Users can choose from a library of more than 50 different bodies, wheels, legs and peripherals as well as a selection of different steps.

The system analyzes factors such as speed and stability to make suggestions so the user doesn’t create a robot so top-heavy that it can’t move without tipping over for example. Once the robot is designed, it is then fabricated using an origami-inspired 3D-printing technique that involves flat faces connected at joints and then folding the design into the final shape, combining the most effective parts of 2D and 3D printing.

Six Robots in About 10 Hours

The team tested the system with eight subjects who were given 20 minutes of training and asked to perform two tasks. One involved creating a mobile, stable car design in about 10 minutes. In the second task, users were given a robot design and asked to create a trajectory to navigate the robot through an obstacle course in the least amount of travel time.

The team fabricated six robots in all, each design took about 10 to 15 minutes, then took three to seven hours to 3D print and 30 to 90 minutes to assemble. Researchers found the 3D print-and-fold method reduced printing time by 73 percent and reduced the amount of material used by 70 percent.

The robots showed a wide range of movement such as using single legs to walk, using different step sequences and using legs and wheels simultaneously. MIT CSAIL believes these robots could help with everyday tasks and similar systems with rapid printing technologies could enable large-scale customization and production of robots.

The current version focuses on designs that can walk, but in the future the team hopes the robots can take flight and to be able to define the behavior of the robot in terms of the tasks it can perform.

The full research can be found in The International Journal of Robotics Research.