Leaks in water supply distribution systems are a serious problem globally. Monterrey, Mexico, loses an estimated 40 percent of its water supply to leaks every year. In Saudi Arabia, where most drinking water is provided through expensive desalination plants, some 33 percent is lost through leakage.

Leak detection systems do exist, but most are expensive and slow to operate. The equipment is also not suitable for systems that use wood, clay or plastic pipes, which are widely deployed in the developing world.

A rubbery robotic device engineered by the MIT PipeGuard team may offer an inexpensive solution that requires no digging or interruption of water service. When inserted into the water system through a fire hydrant, the robot moves passively with the flow, logging its position along the way. Even small variations in pressure are detected by sensing the pull at the edges of its soft rubber skirt, which fills the diameter of the pipe. The data is uploaded after a net retrieves the device through another hydrant. 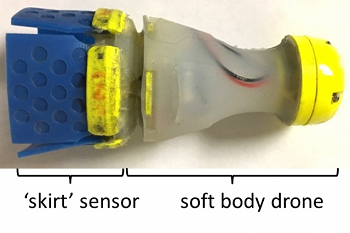 Small variations in pressure are detected by sensing the pull at the edges of its soft rubber skirt, which fills the diameter of the pipe. Image credit: MIT PipeGuard team

Tests conducted using a mile-long section of two-inch rusty pipe provided by Pipetech LLC, a pipeline service company in Al Khobar, Saudi Arabia, involved creating an artificial leak for the robot to find. The robot did so successfully, distinguishing the characteristics of the leak from false alarms caused by pressure variations or changes in pipe size, roughness or orientation. A leak that was about one gallon per minute, which is one-tenth the minimum size that conventional detection methods can find on average, was also revealed.

Testing is currently underway in 12-inch concrete water-distribution pipes under the city of Monterrey, after which the researchers plan to design a more flexible, collapsible robotic version that can quickly adapt itself to pipes of different diameters. The robot would expand to adapt to each pipe.

The system might also be used for other kinds of pipe distribution systems, such as those for natural gas. These pipes are often old and poorly mapped, and have produced serious gas buildups and even explosions in some cities. The MIT system was actually first developed to detect gas leaks, and later adapted for water pipes.